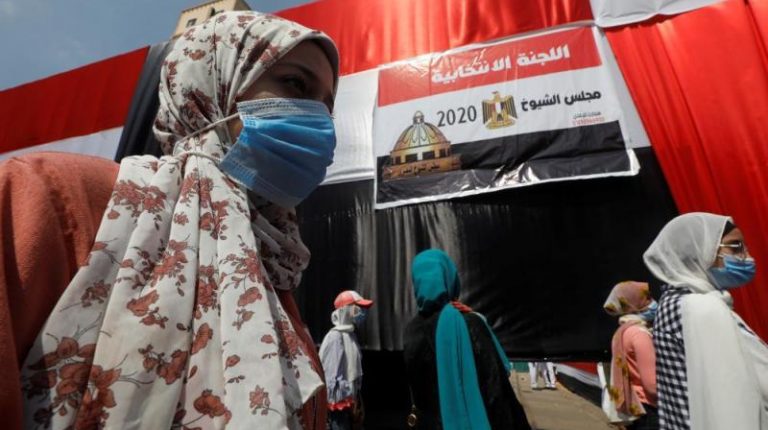 A higher turnout was recorded in several areas of Egypt during the second day of voting on Wednesday in Egypt’s Senate elections, compared to the first day on Tuesday.

Many voters were enthusiastic to participate, with some expressing optimism at the Senate’s potential to help improve conditions in the country. Other voters wanted to support their relatives who were taking part as candidates in the elections, whilst others believed that voting was a right for all citizens. Others yet feared they would have to pay fines if they did not vote.

Voters at a range of constituencies told Daily News Egypt their reasons for participation in the Senate elections.

A 60-year-old businessperson, who casted his vote at the Sheikh Zayed polling station, said it’s his right to do vote.

He added, “I wanted to see how it would go, and to give my vote.”

He also said, “There were no crowds at the Sheikh Zayed polling station, with everything remaining quite organised since few people were inside the ballot station. There were precautionary measures in place, and I did not notice anything inappropriate.”

A young female voter in Port Said, who spoke on condition of anonymity, said that whilst the polling station, where she was supposed to vote, was not busy, there were more male voters to be seen there.

She noted that all precautionary measures were in place, regarding the measuring of body temperatures and wearing facemasks.

“I was keen to participate because I am looking forward to seeing effective participation from the Senate in improving the country’s condition,” she said. “That’s why I want to elect educated people in both individual and list systems.”

Dina Talaat, a 51-year-old customer service manager at a multinational chemicals company, said the ballot station she attended in Cairo was not busy. She went in the afternoon, and found that most of the voters were women or middle-aged men.

“I participated in the elections because it is my duty towards my country, and to be a role model for my children, and because I don’t want to be negative,” Talaat said.

Regarding the candidates, Talaat noted that she voted based on the recommendation of some friends, as she did not know all the candidates, except for Political Science Professor Mona Makram Abeed.

“For the list system, there was only one list, which I had to vote for by indicating yes or no,” she added.

Moreover, a 54-year-old voter in Alexandria said, “I voted because I do not want to see any ’beards’ ruling the country again,” referring to Islamist candidates.

“All my votes were for female candidates, and I also voted for a male candidate who I know personally,” the Alexandrian said, adding, “I did not choose the list system as I don’t know any of its candidates.”

Asmaa Abotaleb, a 26-year-old HR officer at a private company, said that she participated to support candidates whom she knows.

“When I entered the balloting place at the Dokki constituency, I found that I should select eight candidates, but I really did not know any other than those who I went to support,” she said. “I chose only those I know, so I think my vote is void as I must choose eight.”

Abotaleb indicated that she had a little knowledge about the election process, but only wanted to support some candidates.

Abotaleb’s sentiment was mirrored by marketing employee Ann Kamel who went only to support her friends who are taking part in the Senate elections as candidates.

Meanwhile, a 33-year-old journalist said that he visited his polling station in the Maadi district, where security forces were distributing masks to voters. He noted that female voters dominated the scene in front of his polling station.

He added that he voted for an individual candidate, despite recognising that she had the weakest campaign among other candidates, and that he wanted to support her anyway.

A 58-year-old teaching assistant at an experimental school said that she went to her nearest polling station to vote for fear of paying the EGP 500 fine.

She was, instead, asked to vote in the Al-Haram district according to the address in her national ID.

A dentist, 27, who voted in the Old Cairo constituency, said that she left the ballot empty and did not choose anyone as she did not know any candidates.

“The medical directorate where I work obliged me to vote, otherwise I would be referred to an investigation, so that’s why I went,” she explained.

Finally, a female IT manager, 37, who voted at a balloting station in Nasr City, said that she was keen to participate in elections, “as voting is a must and fidelity to the country, even if I don’t know how this council [Senate] will help me.” She said she had voted for Mostaqbal Watan Party list, adding, “I feel they can help the people most in need.”

“I have not abstained from voting since the 2011 Revolution,” she said.

Lashin Ibrahim, head of the National Elections Authority (NEA), had previously announced the authority is seriously considering imposing a EGP 500 fine for anyone who fails to perform their national duty and not voting, in accordance with the law.