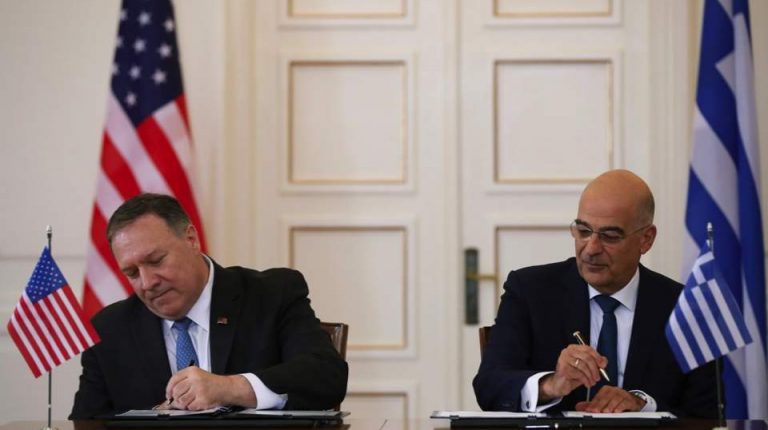 The foreign ministers of Greece and the United States will meet in Vienna on Friday to discuss ongoing tensions in the Eastern Mediterranean region, the Greek Foreign Ministry said on Wednesday.

The scheduled meeting between US Secretary of State Mike Pompeo and his Greek counterpart Nikos Dendias comes amid a dispute between Athens and Ankara over hydrocarbon resources in Eastern Mediterranean waters. Recently, Turkey dispatched the seismic survey vessel, Oruc Reis, to an area claimed by Greece.

Turkey has said it plans to issue gas exploration and drilling licences in the region, somewhere between the Greek island of Crete and Cyprus, this month.

Dendias also said the calls for an EU meeting came amid an obvious Turkish threat to the Eastern Mediterranean’s peace and security.

“There will be no tolerance of Turkey’s attempts, and Greece will defend its sovereign rights,” Dendias said, calling on Turkey “to leave the Greek continental shelf immediately.”

Accordingly, an extraordinary EU foreign ministers meeting has been set for Friday, via teleconferene.

Later on Wednesday, Turkey’s Defence Minister Hulusi Akar said he wanted to resolve the dispute with Greece through dialogue.

Greece and Turkey, are both members of NATO, however, they disagree about their overlapping claims on hydrocarbon resources in the Mediterranean, based on conflicting views of how far their continental shelves extend in waters dotted with islands.

Earlier this month, Egypt and Greece signed a maritime demarcation deal establishing an exclusive economic zone (EEZ), which would see the full utilisation of mineral resources in the Eastern Mediterranean region.