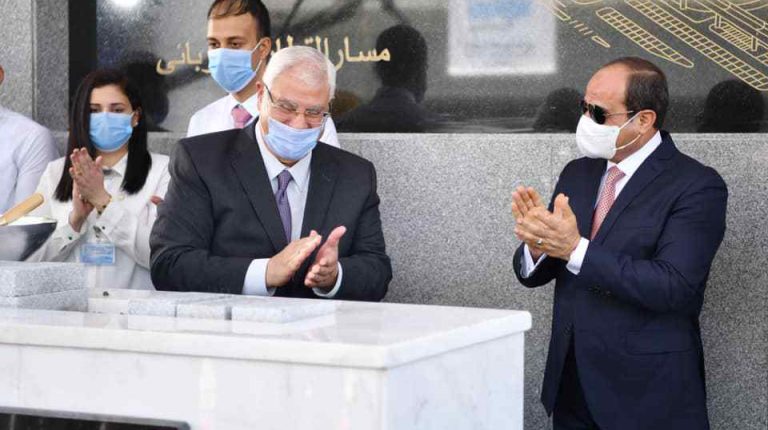 The new Metro phase serves as a link between the New Administrative Capital (NAC) and the rest of the country.

During the inauguration, Al-Sisi highlighted the extensive work currently underway on Egypt’s road systems, as a means of improving transportation across the country.

The President said, “We seek to provide an outstanding service to citizens through developing the country’s road systems.”

“We wish to do something good for the country and its people, and to help them move easily on the roads,” Al-Sisi said. “We will also improve trade movement and the routes that trade traffic moves along, so that agricultural crops can be properly transferred, whilst protecting them from damage.”

Al-Sisi noted that construction violations only stall the development of Egypt’s road projects.

Addressing the gathering, Prime Minister Mostafa Madbouly said Egypt has achieved record rates in its implementation of low-cost transport and road projects. All projects have been conducted with the highest degree of efficiency and quality.

Following Madbouly’s remarks, a documentary entitled “The Shining of a Nation”,  produced by the Armed Forces’ Department of Morale Affairs, was screened to shed light on the achievements that have been made in Egypt’s transport and road sector so far.

Taking the podium, Minister of Transportation Kamel El-Wazir noted that Egypt has undertaken a total of EGP 1.1trn in transport and road projects, which will be implemented nationwide until 2024. He added that road and bridge construction projects are set to the tune of about EGP 377bn.

El-Wazir also briefed President Al-Sisi on the accomplishments made by Egypt’s transportation sector between June 2014 and June 2020. He said that 7,000 km of roads have been developed during this time period, at a cost of EGP 175bn.

Also speaking at the event, Prime Minister Mostafa Madbouly added to El-Wazir’s remarks, noting that the average annual distance of road implemented in Egypt has increased from 270 km to 1,150 km. He also indicated that about 7,000 km of road systems have been constructed across Egypt.

Madbouly indicated that there has been a clear indication that attention needs to be paid to the quality of Egypt’s roads and raise their efficiency.

The prime minister also reviewed the work that has been achieved in large-scale transportation ventures over the past six years. He referred to President Sisi’s directives to press ahead with a National Strategic Plan for Urban Development-Vision 2052.

In addition to highlighting the future development plans for the next 40 years, Madbouly said that his government is currently working to extend over 7,000km of new roads nationwide.  Of this, 4,500 km have already been finalised, and 5,000 km have been transformed into two-lane roads.

The government upped road-construction rates to 1,150 km annually as compared to 270 km for the period before 2014, he said.

When President Al-Sisi first assumed office in 2014, he directed the government to implement a comprehensive plan to upgrade Egypt’s transport sector. He noted that an effective transport sector is key to achieving sustainable development.

Madbouly put the total value of investments allocated for the transport sector at EGP 950bn, of which EGP 424bn has already been used to bankroll projects. Over the past six years many projects have been implemented, of which 50% are roads and bridges in different governorates, he added.

About EGP 45bn have been pumped into new cities, and an additional EGP 40bn in railway projects, as well as EGP 33bn going into the Cairo Metro, Madbouly said.

He also touched upon the Suez Canal tunnels venture that has already been completed.

Madbouly reviewed a number of projects recently implemented by the government including work on the El-Galala Plateau in Ain Sokhna, the Middle Ring Road, and the Assiut Plateau Axis. This comes alongside the revamping of existing highway networks, including the Suez Highway, among others.

The Prime Minister further highlighted a number of bridges and corridors are being implemented to reduce traffic congestion across Egypt.

“All road ventures are meant to accelerate the national development process and serve the government’s urban-cities expansion policy,” Madbouly said.