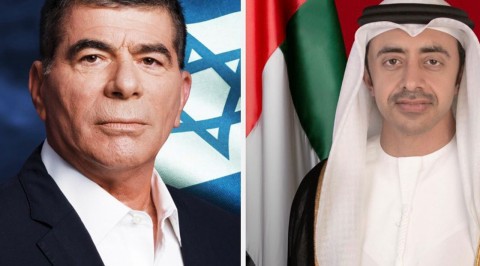 The phone conversation came after the UAE unblocked Israeli telecoms, in a further step towards fully normalised ties between the two countries.

Hend Al-Otaiba, Spokesperson for the UAE’s Ministry of Foreign Affairs, tweeted that both officials “inaugurated a phone link between the UAE and Israel following the historic Peace Accord signed by the two countries on Friday.”

Earlier on Saturday, the UAE’s Minister of State for Foreign Affairs Anwar Gargash said that his country’s decision to strike a peace treaty with Israel has saved the two-state solution. He added that it has also stopped the Israeli plan to annex lands in the West Bank.

In an interview broadcast on CNN, Gargash noted that the Israeli annexation plan had been a ticking time bomb. He asserted that the peace treaty is a historic breakthrough that allows confidence building.

“This is not about Iran, this is about the UAE, Israel and the US,” Gargash was quoted by Bloomberg. “This is in no way meant to create some sort of grouping against Iran.”

Under the deal, Israel has, for now, agreed to put aside its pledge to annex West Bank land the Palestinians want for a state.

“We have been very concerned with the issue of annexation,” Gargash said. “Through this imaginative proclamation, we have at least been able to give space to negotiations.”

He asserted that Israel’s relations with many countries began with baby steps like small tournaments. The UAE took the position two years ago that, if it had to host events like the Expo scheduled for next year, it has to host everybody, regardless of political stance.

According to Gargash, it was a sovereign decision taken by the UAE, with the calculation that such bilateral relations are good for the nation. It would also mean a halt to the Israeli annexation plan, to which he added, “We thought we can marry these two things together.”

Talking about the possible scale of the relationship with Israel, he explained that the Jewish state has expertise in some areas such as aviation, technology, tourism. He added that dedicated teams from the two countries would meet to chalk out functional corporation, which would see the establishing of reciprocal embassies, and the initiation of direct flights between the two countries.

Last Thursday, Israel and the UAE announced a new peace agreement aimed at starting diplomatic relations between the two countries. In the coming week, the UAE and Israel are expected to sign bilateral agreements for future cooperation on agriculture, food security, cyber security, tourism, technology and trade, on the back of the US-brokered agreement.

Meanwhile, Israel’s Minister of Intelligence Eli Cohen revealed, on Sunday, that Israel and Sudan are set to sign a peace agreement.

The Israeli Public Broadcasting Corporation quoted Cohen as saying that “this historic step is expected to take place soon, perhaps before the end of this year.” He added that missions from both countries are in preparing to reach this agreement.

Last February, Israeli Prime Minister Benjamin Netanyahu met with Sovereign Council of Sudan Chairperson, Abdel Fattah Al-Burhan, in the Ugandan city of Entebbe. During the meeting, the two sides agreed to start cooperation in order to normalise the relations between the two states.