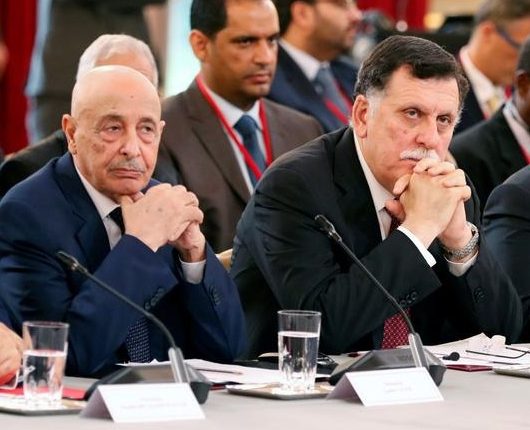 The Tobruk-based Libyan House of Representatives and the Tripoli-based Government of National Accord (GNA) announced in two separate statements, on Friday, that they had agreed on a Libya-wide ceasefire. The two sides also appealed for a halt to hostilities.

The truce, which has come amidst a military mobilisation by the parties involved in the conflict focusing on the northern city of Sirte, follows months of escalation and fighting.

Libyan Parliament Speaker Aguila Saleh said, on Friday, that the ceasefire ends any attempts of foreign military intervention. He added that it would also lead to the exit of mercenaries from Libyan territories, which have been a source of international concern in recent months.

Saleh called for the formation of a mixed police force to safeguard Sirte, whilst making the strategic city a headquarters to the new presidential council.

Both sides have called for oil revenues to be deposited into a special account belonging to the National Oil Corporation at the Libyan Foreign Bank. These funds will be only released after a political settlement is reached.

Sirte enjoys a strategic location and economic significance, due its proximity to Libya’s Oil Crescent, which is estimated to hold 80% of Libya’s oil stocks. The Jufra Airbase, one of Libya’s biggest air bases, is located 300km south of Sirte.

“I do not believe this truce would succeed for many reasons, most importantly that neither Aguila nor Al-Sarraj has the power to control the Libyan territories,” Ali Al-Takbali, a member of the Tobruk-based Libyan Parliament’s defence and national security committee, told Daily News Egypt.

Al-Takbali added, “Al-Sarraj had to sit down with the other party for negotiations, amid pressure from Turkey and Misrata’s militias, and also because he felt a sense of danger from Libyans who went to the streets against his government.”

Haftar has so far not directly commented on declarations by Saleh and Al-Sarraj, although the LAAF had earlier announced its rejection of any suggestion to transform Sirte into a “demilitarised” zone. The LAAF said that its forces will not retreat an inch from Sirte or the area surrounding the city, adding that it will not deliver it to “the invaders.”

Meanwhile, Al-Takbali agreed with the LAAF’s rejection of turning Sirte to a demilitarised zone.

He said, “Whoever wants a real solution has to go to Tripoli and disarm militias and dismiss Turkey and the mercenaries from Libya.”

Regarding Haftar’s absence, Al-Takbali said that the Libyan parliament is the body responsible for negotiations, rather than the LAAF.

He believes that Haftar has yet to issue a comment on the initiatives, as the LAAF is waiting to closely observe the events. He added, “It will speak up if matters did not go in its favour.”

Friday’s declaration was welcomed by Egypt’s President Abdel Fattah Al-Sisi, who described the move as a significant step on the road to reaching a political settlement. The move was also hailed by the UAE, Saudi Arabia, Italy, Germany, Russia, France, and the US.

Stephanie Williams, the acting head of the UN mission in Libya, said that “the two initiatives have created hope for forging a peaceful political solution to the longstanding Libyan crisis”.

Williams called for the immediate expulsion of all foreign forces and mercenaries in Libya.

The oil-rich country has been split between two parties since 2014: namely the GNA backed by Turkey, and the LAAF supported by Egypt, the UAE, and Russia.