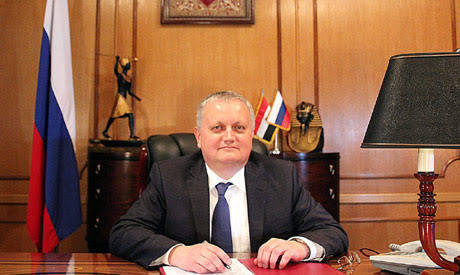 Russia’s Ambassador to Egypt, Georgy Borisenko, asserted on Sunday that Egypt is one of the former’s main trade partners in the Middle East and North Africa (MENA) region.

The Egyptian-Russian cooperation is both historic and deeply rooted, as the two states share views on many international and regional issues, whilst cooperating via different international organisations, Borisenko told the state-owned Middle East News Agency.

He added that the close relationship between President Abdel Fattah Al-Sisi and his Russian counterpart Vladimir Putin constitutes an incentive for rapprochement between the two countries. The ambassador described his country’s relationship with Egypt as friendly and intense.

Borisenko added that Russia is keen on enhancing cooperation with Egypt in security and combating terrorism, and that that a joint working group on counter-terrorism issues is planning to hold a meeting. He has also expressed his country’s appreciation of Egyptian efforts to combat terrorism, specifically the long-term Egyptian counter-terrorist campaign in North Sinai.

Borisenko said that Russia has adopted similar positions to Egypt regarding the Syrian and Libyan conflicts, whilst adding that Russia aims at reaching political solutions for both conflicts.

He stressed that Russia’s goal is to protect international law, rather than endeavouring to protect any political authority in Syria.

The ambassador also confirmed that Moscow understands Egyptian concerns regarding the Libyan conflict especially with the presence of many terrorist groups in eastern Libya. He noted that these groups pose threats not only to Egypt and Russia, but the whole world.

Borisenko asserted Russia’s support for the Cairo Declaration, as it paves the way for a peaceful solution to the conflict in Libya.

He added, “We are making great efforts to avoid the red line [the Libyan cities of Sirte and Al-Jufra] as announced by President Abdel Fattah Al-Sisi.” At the same time, he noted that Russia is conducting continuous consultations with Turkey to reach a permanent ceasefire in Libya.

Meanwhile, Borisenko said that the joint trade exchange between Egypt and Russia has signiicnatly increased to $6.2bn in 2019, making Moscow one of Egypt’s top 10 trade partners. The ambassador added, however, that this exchange declined to $1bn in the first quarter (Q1) of 2020, due to the novel coronavirus (COVID-19) pandemic. He added that Russia’s direct investments in Egypt have increased in the past few years to $7.4bn in 2020.

The ambassador confirmed his country’s support for Egypt’s rights on the River Nile, considering its strategic meaning for Egypt. At the same time, he asserted that Russia recognises Ethiopia’s right to develop its economy, including its energy sector.

Borisenko added that Russia is trying to persuade Addis Ababa to settle this conflict properly without harming its neighbours. He asserted that Russian Foreign Minister Sergey Lavrov has repeatedly appealed to Ethiopia, asking them to abide by the ongoing negotiations and to reach a tripartite agreement on filling and operating the Grand Renaissance Ethiopian Dam (GERD).

He stressed that, whilst impossible to change geography, Nile Basin countries should be able to coexist, and it is necessary to be able to solve all matters in the spirit of good neighbourliness.