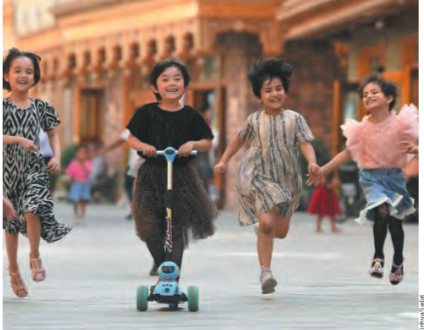 Mehmut Usman, director of the regional ethnic affairs commission, made the comment in response to the 2019 report on international religious freedom issued by the US State Department, which claims that Xinjiang is dis- mantling mosques.

He told a press conference that as long as venues for religious activities are registered with the government under the law, they have legal status, and all their rights and interests are protected by law.

He said the Jami Mosque and Idkah Mosque, which the US State Department report said had been demolished, are well protected.

“Xinjiang has always attached great importance to the protection and repair of mosques, and the governments at all levels in Xinjiang have not only helped and supported the improvement of mosques, but also guaranteed the normal religious needs of religious believers,” the official said.

According to the official, some mosques in Xinjiang were built in the 1980s and 1990s and even longer ago, with shabby facilities and potential safety hazards.

“Through new construction, building on the original site of demolition, and expansion measures according to urban-rural construction planning, we have improved the conditions of the mosques and met the needs of the religious believers, which is widely welcomed by

religious personages and believers,” he said. Abdukerim Mamut, who works for the Jami Mosque in Xinjiang’s Yecheng County, said that the Jami Mosque was originally founded in 1540, and expanded in 1860. It underwent

repair in 1937, 2014, and 2019, respectively. “Considering the long history of the mosque, the government consolidated it in 2019 to provide better and safer services for religious believers,” he said.

Elijan Anayit, spokesperson for the Information Office of the Regional People’s Government, said at the press conference that the government has no restrictions on ethnic cus-

toms of wedding and funeral ceremonies and giving Islamic names.

According to the spokesperson, among ethnic minorities who have the habit of burial, the government does not promote cremation. Instead, it takes specific measures to protect their custom, such as allocating special land

for cemeteries.
As for the US report claim that “the Sulitan cemetery in Hotan and the cemetery of Tazhong road in Aksu have been destroyed”, the spokesperson said the report calls white black.

“The cemeteries have not been destroyed, but are rather well protected,” he noted.