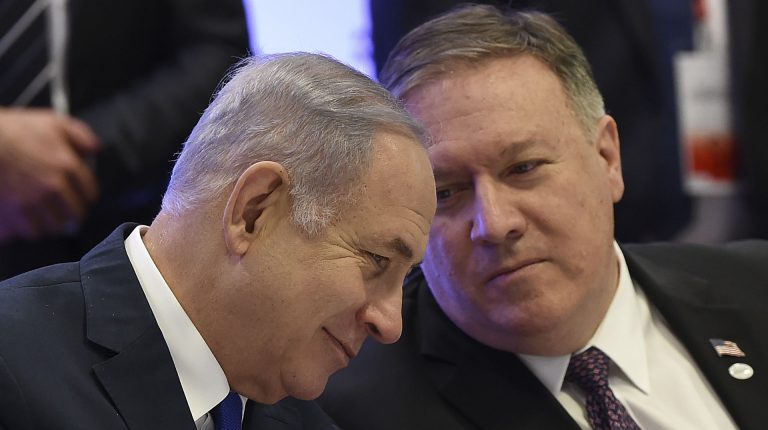 US Secretary of State Mike Pompeo began a Middle East tour, on Monday, including Israel, Sudan, Bahrain, and the UAE.

Pompeo is expected to push more Arab states to normalise their ties with Israel, following the footsteps of the UAE, during the visit to the region, which is set to last until 28 August.

He arrived in Jerusalem earlier on Monday, and met with Israel’s Prime Minister Benjamin Netanyahu. The two sides held talks on Iran’s influence, establishing and deepening Israel’s relationships in the region, according to a US Secretary of State statement.

The statement added that the two sides will also discuss their cooperation to protect the US and Israeli economies from malign investors.

Pompeo and Netanyahu held a joint press conference, at which Pompeo stressed his country’s commitment to preserving Israel’s military edge in the Middle East.

“The US has a legal requirement with respect to the Qualitative Military Edge (QME), and we’ll continue to honour that,” Pompeo said. He added that Washington has “provided military assistance to the UAE and will continue to review that process”.

Pompeo also noted that US President Donald Trump has made it clear that Iran will not achieve status as a nuclear-armed nation, while Netanyahu called for the re-imposing of sanctions on the Iranian regime.

Furthermore, Netanyahu said that the UAE-Israel deal on normalising ties promises a new phase in the Middle East. He added, however, that “the UAE deal doesn’t include Israel’s acceptance of any arms deal”.

In Sudan, Pompeo is set to meet with Prime Minister Abdalla Hamdouk and the Sudan Sovereignty Council Chair General Abdel Fattah El-Burhan. Together, they will discuss “continued US support for the civilian-led transitional government and express support for deepening the Sudan-Israel relationship”, according to US Secretary of State statement.

Pompeo will then head to the Bahraini capital, Manama, to meet with the country’s Crown Prince Salman bin Hamad Al Khalifa, before he concludes his trip in the UAE.

During his visit to the UAE, Pompeo will meet with the UAE’s Minister of Foreign Affairs and International Cooperation, Sheikh Abdullah bin Zayed Al Nahyan, in Abu Dhabi. The two sides are expected to discuss the agreement with Israel and other regional issues during the meeting.

On 13 August, the UAE signed a deal with Israel that will see the full normalisation of diplomatic relations between the two countries. The deal required Israel to halt its plan to annex the occupied West Bank.

Earlier this week, the AP news agency cited diplomatic officials as saying that Trump’s senior adviser and son-in-law Jared Kushner is also expected to start a Middle East tour later in the week. He is expected to visit Israel, Bahrain, Oman, Saudi Arabia and Morocco as part of the trip.