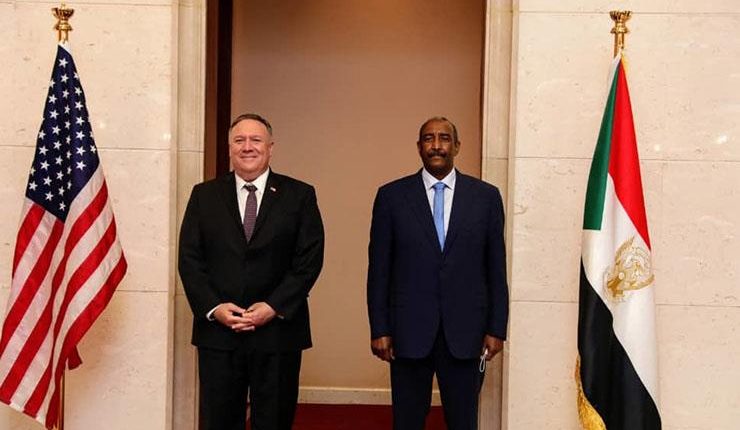 Chairman of Sudan Sovereign Council Abdel Fattah Al-Burhan on Tuesday urged the United States to remove Sudan from its list of states sponsoring terrorism.
Al-Burhan issued the call while receiving US Secretary of State Mike Pompeo who is on an one-day visit to Sudan, the sovereign council said in a statement.
The Sudanese leader expressed delight over the progress in the Sudan-US relations after more than 23 years, while Pompeo reiterated that the US supports the country’s integration into the regional and international surrounding, according to the statement.
Pompeo arrived in Khartoum from Jerusalem on Tuesday as part of a regional tour starting with his visit to Israel, which recently reached a deal with the United Arab Emirates (UAE) to normalize their ties. The UAE has become the third Arab country to establish full diplomatic ties with Israel, after Egypt and Jordan.
Amid reports that Pompeo’s visit to the African country aims to push the country to follow suit by normalizing ties with Israel, Sudan’s Prime Minister Abdalla Hamdok said on Tuesday that the current Sudanese government has no mandate to normalize ties with Israel.
Hamdok made the remarks during his meeting with Pompeo. He explained that the transitional period in the country is led by a broad alliance with a specific agenda to complete the transition process and achieve peace and stability in the country prior to holding fair elections.
The prime minister also urged the US to separate between the process of removing his country from the terror list and the issue of normalization with Israel.
Pompeo is the first US secretary of state to visit the African country since the 2005 visit by Condoleezza Rice.
Since the ouster of former Sudanese President Omar al-Bashir in April 2019, the pace of rapprochement between Khartoum and Washington has been accelerating despite many outstanding issues.
The US listed Sudan as one of the countries sponsoring terrorism in 1993 and started imposing economic sanctions on Sudan in 1997.
The US decided in 2017 to lift its economic sanctions on Sudan, but it has refused to remove Sudan from the terror list so far.