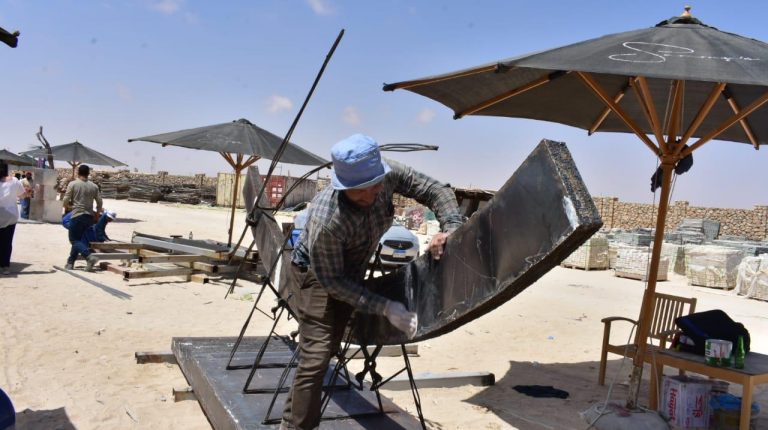 The privately-owned Egyptian company, Art D’Égypte, is hosting an “Art by the Sea” symposium at Almaza Bay, one of Egypt’s top beach destinations. Participating in the event are seven talented local sculptors, who have all contributed to the symposium, namely Ahmed Magdy, Ali Mostafa, Mostafa Khedr, Taha Nasr, Mohamed Abdallah, Abdo Ramzy, and Hany El-Sayed. 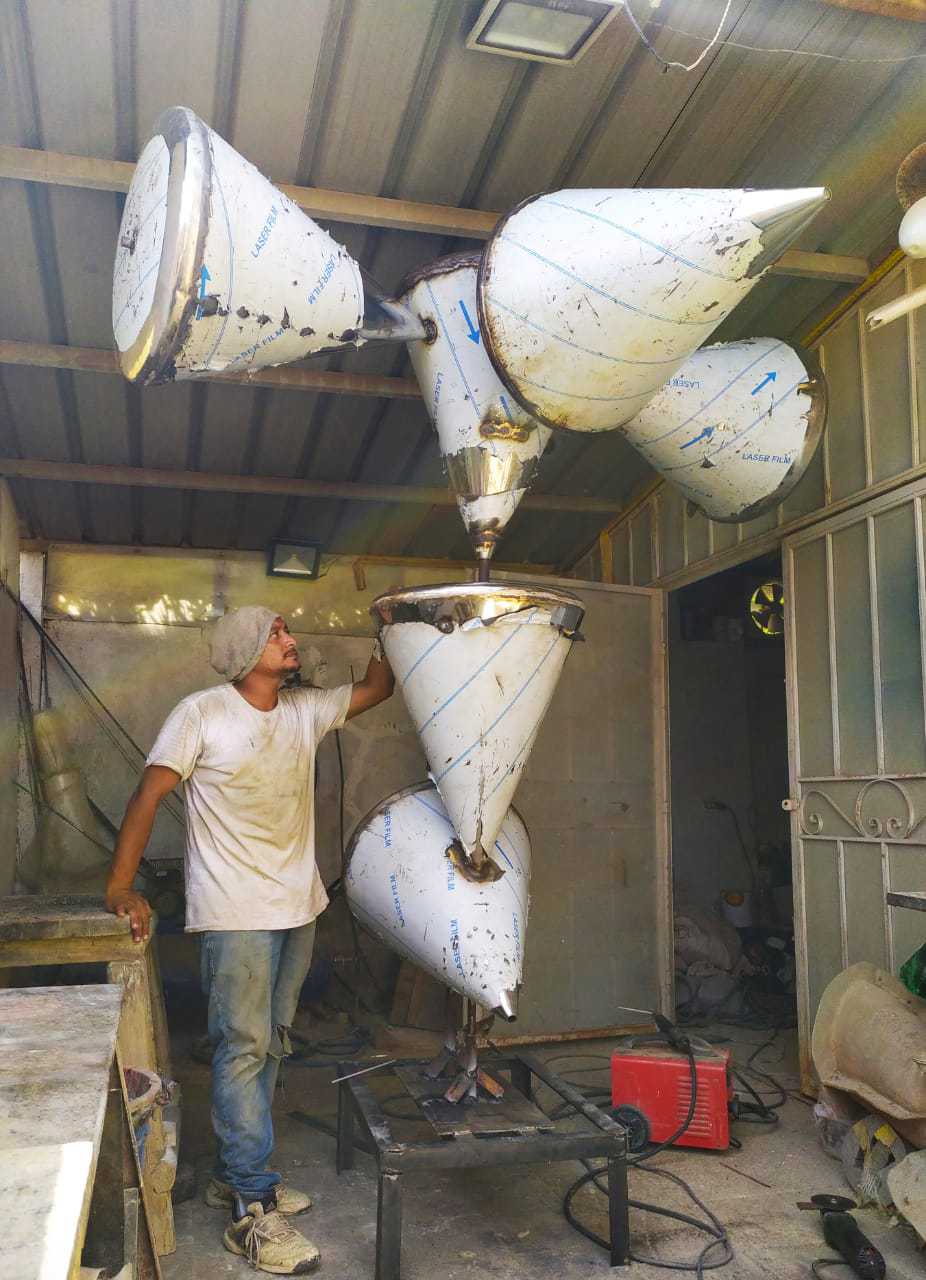 The artists have been working on site, with their final pieces currently on display at Almaza Bay.

In parallel to the symposium, Art D’Égypte is hosting the “Art Town House” exhibition by EX at Almaza Bay’s beachfront. The exhibition includes the distinguished artworks of a number of young contemporary Egyptian artists.

The exhibition will host a plethora of artists all summer long, with art pieces showcased to give visitors a chance to expand and add to their beach house art collections.

Through the funds raised, Art D’Égypte aims to support young artists, who normally receive scant funds, present their work. The company also sets itself the target of bridging the gap between local talent and the world.

Daily News Egypt sat down with the artists who have participated in the symposium, to find out more about their work during the symposium. They explained how they created their special art pieces that tell the story of a beach embracing the true opulence of art.

Among the most prominent sculptures in the exhibition was “Rise”, representing the relationship between the organic and the inorganic. It shows an organic artistic formation represented in the human figure, and an engineering formation evident in the interlocking set of stainless steel cubes.

The person, or character, featured in the artwork is trying to remain present and balanced, while climbing the cubes. It represents a symbol of the willpower and the challenges that humans face until the desired goal is achieved, whatever the difficulties they may face. The artwork took about twelve days to finish.

Nasr is a plastic artist and currently working as a member of the Alexandria University’s sculpture department staff. He has previously participated in many exhibitions and workshops, with a particular focus on artworks constructed from iron, such as the 24th Aswan International Sculpture Symposium.

From his beginnings as an amateur artist, Nasr graduated from Alexandria University’s Faculty of Fine Arts in 2008. Through his studies, he became familiar with the dimensions of art sculpture and raw materials used in the different shaping processes. 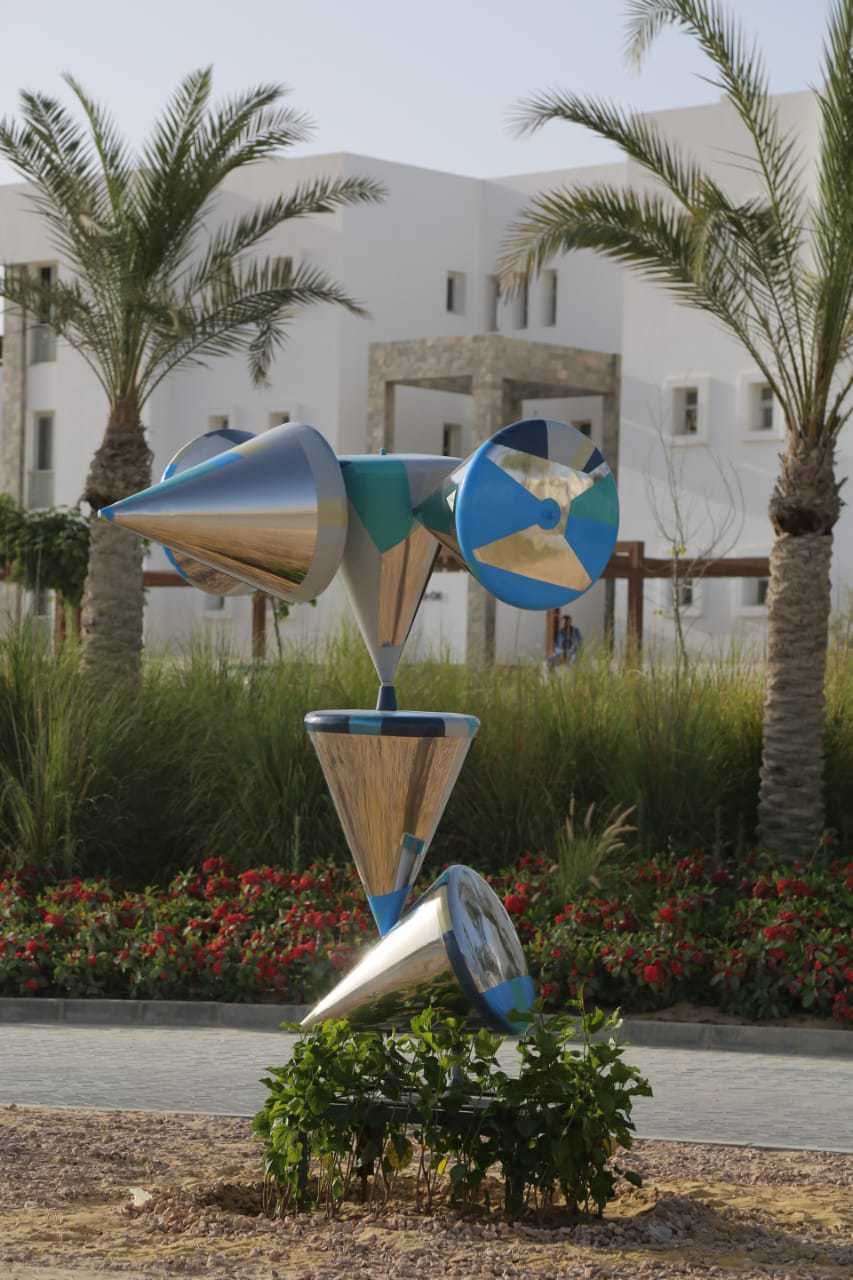 He became fond of iron, due to the vitality this material gives to sculptures in the formation process, and the speed with which the desired formation can be obtained.

“Every artwork is considered to be a part of my artistic entity, or my personality as a plastic artist, which presents my relationship with society and the surrounding environment,” Nasr said.

Magdy participated with a unique freestanding art piece, named “Creation”, at the symposium. It represents the relationship between the six geometric shapes of a cone.

Bringing in childhood memories through the sculpture, the young artist was also inspired by a popular ancient Egyptian game, the Rotating Bee. “Creation” attempts to express the relationship these geometric shapes have with each other, through a composition that presents movement and stability as the upper part of the statue moves with the wind.

He also tried to use shades of colour that fits with the sea, the sky, and the sand. The sculpture, made of iron treated against rust, which is not affected by weather factors, took two weeks to be ready.

“I am always keen to participate in activities that showcase my work in a public place in order to reach people, as it is so important for the artist to communicate with people,” said Magdy.

The sculptor has participated in many local and international exhibitions, including the ”Autumn Exhibition” in El Gouna.

Although he was not always so passionate about art, he did love to arrange and organise things. Following his entry to the Department of Art Education at the Faculty of Specific Education, Magdy soon became enamoured with art.

It was from here that his passion for the art really began under the influence of his sculpture teacher, Professor Mamdouh Elkouk. He had a significant role in teaching Magdy little by little about art, as Elkouk impressed Magdy and inspired his creative talents.

Born and raised in Assiut, Magdy became an unconventional artist who was able to combine the Upper Egypt and coastal cultures.

“I consider my artworks as a part of me. I accept them and love them all,” Magdy said, “I believe the most important artworks are those expressing confrontation, freedom, and human.” 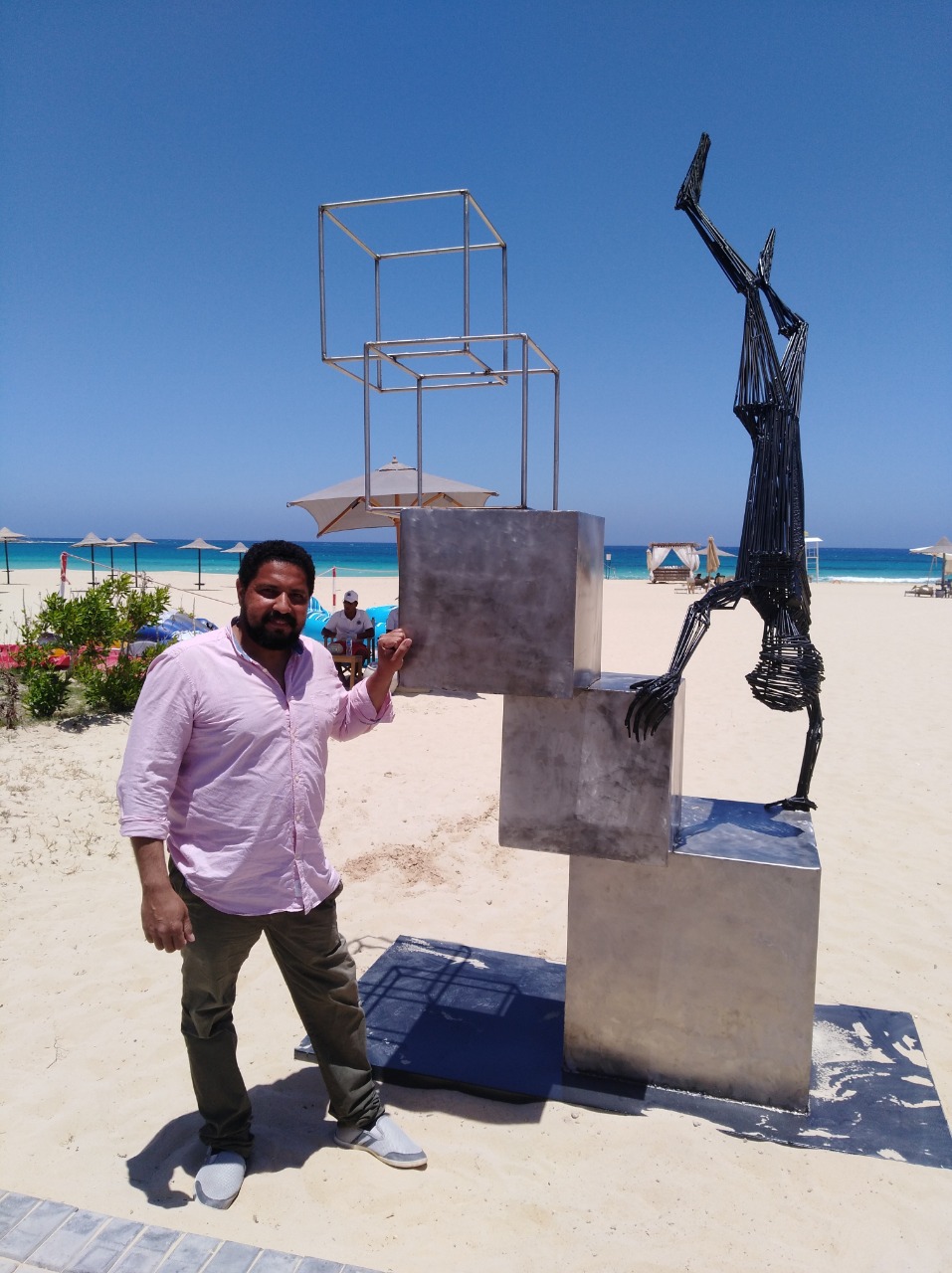 Born and raised in Assiut, Khader started his sculpture career as part of his search for a vocabulary that constitutes a subjective visual language.

“This enables me to present my thoughts, life situations, and dreams in a different and contemporary way,” Khader told Daily News Egypt.

He presented “Moon Call” at the Almaza Bay symposium, inspired by a state of sentimental and emotional communication between the moon and a character whose features embody the beauty of the moon. The material of the artwork is constructed using iron bars.

Khader first started his route in the sculpture field in 2009, through his participation in the Cairo Opera House’s annual Youth Salon exhibition. Since then, he has become a regular fixture at the event, and has contributed to other exhibitions such as the China-Arab friendship exhibition.

With a presence in the Egyptian Art Movement as far back as 1995, Ahmed has also participated in both national and international sculpture events. This includes Youth Salon events, the Biennial of Young Artists from Europe and the Mediterranean in Italy, as well as the Aswan Symposium for Stone Carving.

Ahmed presented a statue entitled “Sunboat” at the Almaza Bay symposium, inspired by the sun boat of the Pharaoh Khufu. Sunboats represented one of the most important methods of transportation along the River Nile in Ancient Egyptian times.

“Of my previous artwork, the one that I prefer the most is a statue I presented at a Chinese exhibition, which was a symbol of the modern forces,” Ahmed said. 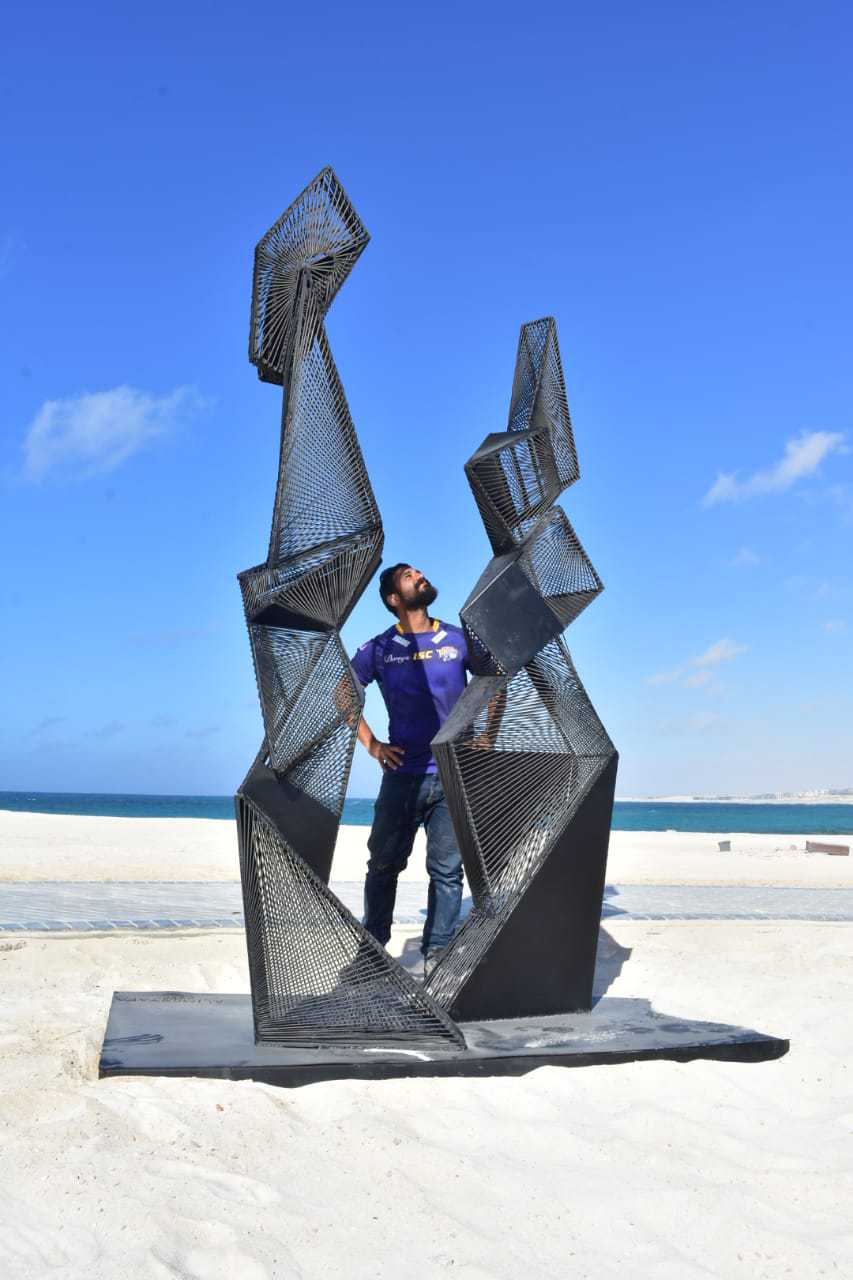 Although he originally started his studies in law, his love for fine arts saw him shift away to re-enrol at Alexandria University’s Faculty of Fine Arts. Upon entering the faculty, he discovered his passion for studying sculpture, and specifically the use of iron in his statues.

Leading up to his graduation in 2019, Mostafa used iron for the sculptures in his graduation project, in a project inspired by the English sport of rugby.

“In my opinion, iron ore is a strong material in terms of expression and its ability to spread in a vacuum,” Mostafa asserted, “The artist can freely express his ideas and artistic designs using iron.”

At the Almaza Bay symposium, he presented a statue entitled “Integration” as a symbol for the chaos between convergence and divergence, between what is straight and what is bent.

The sculpture is about a man and woman speaking to each other, the integration in relations, that positive energy is unlimited, and it interferes and unties itself to revive itself.

He has previously participated in several symposiums, the first of which was the Ostraka International biennale in Sharm El-Sheikh, and Matruh Scrap Iron Sculpture Symposium.

“In my opinion, my work presented in my graduation project at the Faculty of Fine Arts is considered one of my most important works, because it can be considered the first step in my artistic career,” Mostafa added.