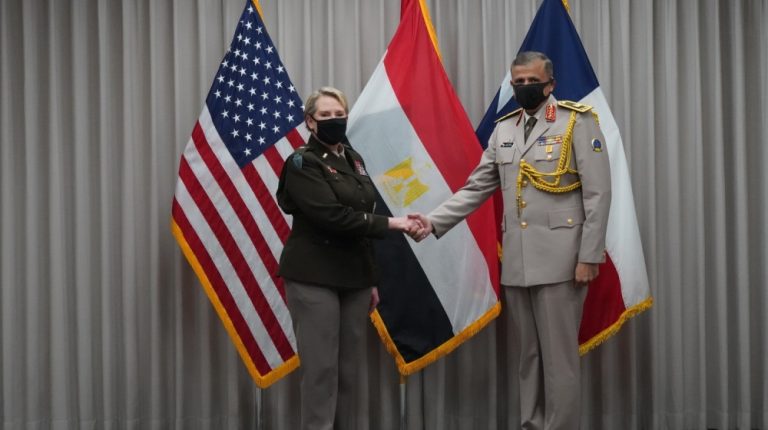 Egypt and the US State of Texas have taken the first step in forming a long-term partnership under the US National Guard’s State Partnership Program on 24 August, the US Embassy in Cairo announced on Tuesday.

The long-term partnership will benefit both Texas and Egypt through exchanges and exercises in a range of areas, including: C-130 and F-16 flight manoeuvre and maintenance; cyber defence; logistics; special forces training; homeland security response preparedness; military support to civilian authorities; and humanitarian and disaster assistance response.

A meeting was held at Camp Mabry in Austin, Texas, with the attendance of US Secretary of State for Texas Ruth Hughs, the Adjutant General of the State of Texas, Major General Tracy Norris, and Egypt’s Defence Attaché to the US Major General Abdelraouf Moussa. During the meeting, the participants affirmed their intent to form a long-term partnership between the Texas National Guard and the Egyptian Armed Forces.

“The Texas Military Department is proud to play a key role in the overall US-Egypt relationship,” Norris said, “From the Texas National Guard’s continued participation in Exercise Bright Star, a decades-old, multilateral defence exercise, to Texas National Guard units supporting the MFO’s mission in Sinai, Texas is a key player in the military partnership between our two countries. The formal establishment of our partnership through the State Partnership Program codifies and makes official a relationship between our militaries that has been in the making for decades.”

In conjunction with the signing in Texas, US Ambassador to Egypt Jonathan Cohen noted that the US military relationship with Egypt has been a foundation of the US-Egypt strategic partnership for over forty years.

Moussa and other Egyptian officials also toured Texas military facilities and observed operations at the US-Mexico border. A formal signing ceremony of the State Partnership programme is scheduled for later this year in Cairo, at which time Egypt will have the opportunity to showcase its military capabilities for visiting US officials.

While the Egypt-Texas partnership is the latest, the US National Guard’s State Partnership Program includes partnerships with 84 nations around the globe.

The fine line between freedom and anarchy