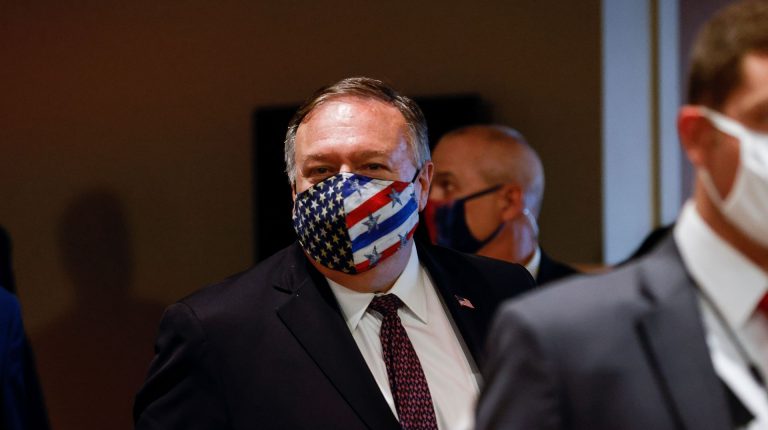 Ethiopian Prime Minister Abiy Ahmed arrived in Khartoum, on Tuesday, on the same day that US Secretary of State Mike Pompeo made what the latter tweeted as the “first official non-stop flight from Israel to Sudan.”

Pompeo’s visit came as part of a Middle East tour aimed at pushing more Arab countries to normalise relations with Israel. The US push comes in line with the Israel-UAE normalisation deal in early August.

Ahmed’s one-day visit aims to “strengthen relations between Sudan and Ethiopia, and discuss ways of cooperation in a manner that serve the interests of both countries,” according to Sudan News Agency and Ethiopia’s Ambassador to Khartoum, Yibeltal Aemero.

Sudan’s Prime Minister Abdalla Hamdouk received the Ethiopian premier at Khartoum Airport, in the presence of other Sudanese ministers and top officials.

“I welcome the visit of the Ethiopian Prime Minister Abiy Ahmed. Looking forward to further strengthening our common interests and deepening the historical ties between our sisterly countries,” Hamdouk tweeted with photos of him with his Ethiopian counterpart.

Ahmed also tweeted that the bonds between the two countries “are unbreakable.”

“I reaffirmed Ethiopia’s solidarity with Sudan to Hamdouk in our discussions today. Our commitment to economic integration, joint progress, and regional stability remains, as we explore opportunities to enhance bilateral ties,” Ahmed continued.

Ahmed is expected to hold talks with Pompeo in Khartoum on Tuesday. The talks come as 20 US Congress representatives conveyed in a letter to Pompeo their serious concerns over reports of security forces abuses, and ethnic and religious violence in Ethiopia.

The visit came as tensions between Sudan and Ethiopia have surged in recent months, over the controversial Grand Ethiopian Renaissance Dam (GERD), and a worsening border conflict amid increasing attacks on Sudanese troops.

Talks resumed between the three countries involved in GERD negotiations, Egypt, Sudan and Ethiopia, on 27 July. The legal-technical committee on Ethiopia’s mega dam will, on 28 August, provide a report on the outcomes of its work to South Africa, the current chair of the African Union (AU).

During his visit to Khartoum, the first to Sudan by a US Secretary of State in 15 years, Pompeo held talks with Hamdouk that tackled Sudan’s removal from the US State Sponsors of Terrorism list as well as the US government’s support of the Sudanese government, Hamdouk tweeted. Sudan has been on the US list of states supporting terrorism since August 1993.

According to a US Secretary of State statement on Sunday, Pompeo is set to discuss with Hamdouk and Sudan Sovereignty Council Chief Abdel Fattah El-Burhan “The US support for the civilian-led transitional government and express support for deepening the Sudan-Israel relationship.”

During his visit to Israel, Pompeo expressed his hopes that other Arab nations would follow in the UAE’s footsteps, asserting that Washington has “provided military assistance to the UAE and will continue to review that process”.

Sudan, along with Bahrain and Oman, is believed to be the next Arab state to normalise its relations with Tel Aviv. However, the Sudanese Ministry of Foreign Affairs fired its spokesperson last week, over his remarks that his country is looking forward to signing an agreement with Israel to normalise ties between the two countries.

The Sudan Sovereignty Council head, General Abdel Fattah El-Burhan, met with Israeli Prime Minister Benjamin Netanyahu in February this year in Uganda. During the meeting, Netanyahu announced that Israel and Sudan were working towards normalising ties.

The Sudanese army supported the Netanyahu-Burhan meeting, and a spokesperson for the General Command of the Sudanese Armed Forces said the talks were held with the knowledge of Hamdouk. A Sudanese government spokesperson said, however, that the cabinet had no knowledge of the meeting.

Al-Burhan urges US to remove Sudan from terror list