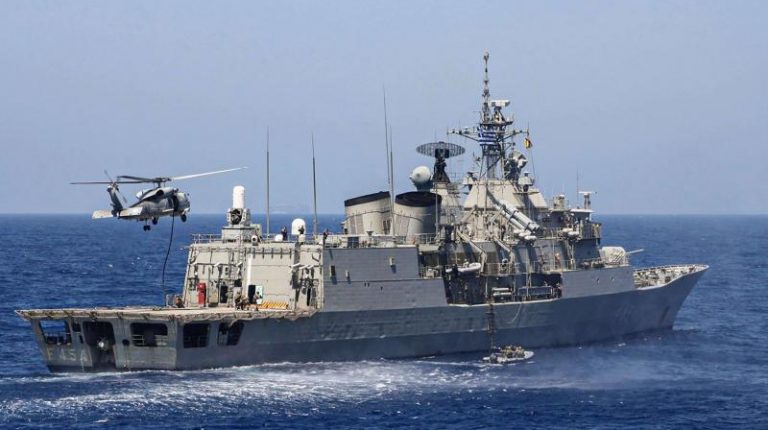 Greece announced, on Wednesday, that it undertook joint aeronautical exercises with Cyprus, Italy, and France in the Eastern Mediterranean area.

The drills, dubbed “Eunomia”, are taking place off the islands of Cyprus and Crete, and will last for three days beginning on Wednesday, Greece’s Ministry of Defence said in a statement.

Greek Minister of Defence Nikos Panagiotopoulos said, “The initiative aims to demonstrate the commitment of the four European Mediterranean countries to the rule of law, as part of the policy of de-escalating tensions.”

Moreover, France confirmed its participation in the drills through a statement by its Ministry of Armed Forces, which pointed out that the country has contributed three French Rafale jets and one frigate equipped with a helicopter to the military exercises.

“Our message is simple,” French Defence Minister Florence Parly said on Twitter, “Priority for dialogue, cooperation and diplomacy so that the eastern Mediterranean becomes an area of stability and respect for international law.”

The joint exercises came as a part of the cooperation between the four countries to address the growing tensions in the Mediterranean.

The tensions increased recently as Turkey sent the Oruc Reis research vessel, on 10 August, accompanied by warships, as part of gas exploration activities in a disputed area of the eastern Mediterranean.

Egyptian Member of Parliament (MP) and Head of the Middle East Forum for Strategic Studies, Dr Samir Ghattas, told Daily News Egypt, “The tension between the two NATO members is a complex problem, and NATO has become confused about which parties to support, especially with Turkey’s insistence on exploring for gas in areas considered as a Greek special economic zone”.

Those European countries bordering the Mediterranean Sea have expressed their support for Greece, with France also having sent naval vessels to secure the region. Ghattas added that there are reports that the US has sent F-16 planes as well.

He explained that Turkey’s military power is the second power in the NATO alliance, with the alliance having 11 military bases on Turkish territory. These include an air base packed with 57 American nuclear aircrafts, that have been placed in Turkey in case of war with Russia.

Ghattas asserted that Turkey is an important strategic pillar for the US, where it plays the role of a mediator between Russia and Central Asian countries that were formerly part of the Soviet Union. As a result, it prevents Russia from any expansion in its former satellite states.

“Erdoğan is escaping from Turkey’s internal problems through external discoveries, as his recent discovery of a gas field in the Black Sea strengthens his position in the presidential elections of 2023,” the Egyptian MP justified.

He pointed out Germany’s position regarding the Turkish-Greek crisis is as a mediator that is trying to reach a compromise solution. However, Germany is Turkey’s main economic partner in Europe, and it has also participated in Turkey’s eastern Mediterranean gas exploration.

“A military solution is also proposed, but most likely the crisis will not reach this point as the NATO alliance will not allow two member states to use military action to solve the problem, he explained,” Ghattas said, “However in case of escalation, NATO will be forced to support only one side or applies a policy of neutrality, which will undermine the NATO’s powers, and that is what Russia aims for.”

He added, “In my opinion everyone will resort to political solution, and the US is more likely will propose a compromise solution to deter Turkey and oblige Greece to make a few concessions. Although Egypt is clearly support Greece politically I do not expect that Egypt would engage in any military solution.”

Meanwhile, Greece stated on Wednesday that it plans to extend its territorial waters from six to 12 nautical miles, according to Prime Minister Kyriakos Mitsotakis.

In a response to the current crisis with Turkey over drilling rights in the eastern Mediterranean, Mitsotakis told parliament that Greece was abandoning decades of “passive” foreign policy.

In response to the Greek joint exercises in the Eastern Mediterranean, Turkey’s Erdoğan warned Greece, on Wednesday, not to test his country’s patience or courage.

“Turkey will take what is its right in the Mediterranean, in the Aegean and in the Black Sea,” Erdoğan said, asserting that he is “determined to do whatever is necessary in political, economic and military terms.”

“We invite our interlocutors to get their act together and to avoid mistakes that will lead to their ruin”, he added.

His words came one day after German mediation attempted to de-escalate the tensions, with Germany’s Foreign Minister Heiko Maas calling for tension de-escalate. He also warnedTurkey that a “spark could lead to a disaster”.

“The current situation in the eastern Mediterranean is playing with fire, and any spark, however, small could lead to a disaster,” Maas said after meeting with his Greek counterpart Nikos Dendias. He asserted that Germany and the whole of the EU stood by Greece “in firm solidarity”.

“What we now need absolutely and immediately are signals of de-escalation and a readiness for dialogue,” he added.

During his meeting with Maas,  Dendias accused Turkey of continuing to provoke its neighbour and displaying “neo-Ottoman” ideology on Tuesday.

As part of Germany’s mediation efforts, Maas had visited Greece and Turkey, on Tuesday, in an attempt to de-escalate the tensions between the two sides. This came in addition to encouraging both countries to engage in direct talks.

Later on Tuesday Cavusoglu said, “I would like to advise Greece, to abandon its spoilt (action)”.  “Act with common sense,” he added, warning that Turkey was ready to “do what’s necessary without any hesitation.”