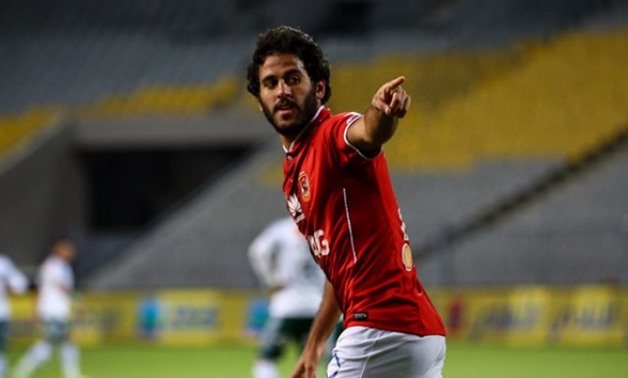 Cairo giants Al Ahly’s forward Marwan Mohsen found himself at the eye of a storm following the club’s Saturday evening derby with Zamalek, due to his poor reaction after a promising pass from a teammate.

The incident occurred late in the second half, when Mohsen did not pick up on a pass from his Senegalese teammate, Aliou Badji, as he believed himself to be offside in front of the opposing team’s goal.

The Red Devils suffered a disappointing 3-1 defeat to rivals Zamalek.

Mohsen moved to Al Ahly in July 2016 from Ismaili in a transfer worth EGP 10m and in exchange for a loan player from Al Ahly. Since his move to the Red Devils ranks, the player has participated in 70 matches in various tournaments, during which he has scored 17 goals and made six assists, an insignificant contribution.

Sources from Al Ahly have told Daily News Egypt that the club management and planning committee have decided to reconsider Mohsen’s contract extension, which he signed in the past few days. The move comes despite the contract ensuring that the player will stay with the club for an additional two seasons, to the end of 2023.

A source familiar with Al Ahly told Youm 7 that there was an agreement to extend Mohsen’s contract, but after the recent events and the decline in the player’s performance, the club has decided to review the file. The source added that, although Mohsen signed a contract extension, it is possible for the club to not officially give its seal of approval, as no new contracts have been registered with the Egyptian Football Association (EFA).

To add insult to injury, some Egyptian football stars have, since the incident, launched a criticism campaign against Mohsen. Few are sympathetic, and doubt has been cast on whether he should continue playing football if he is cannot keep tabs of events on the field.

The match at the Cairo International Stadium was held as part of the 21st round of Egyptian Premier League matches. The league was restarted following a brief hiatus due to the novel coronavirus (COVID-19) pandemic. The last win saw Zamalek advancing to second place in the league with a total of 42 points, while Al Ahly remains top of the Egyptian Premier League table with 56 points after 21 games played.