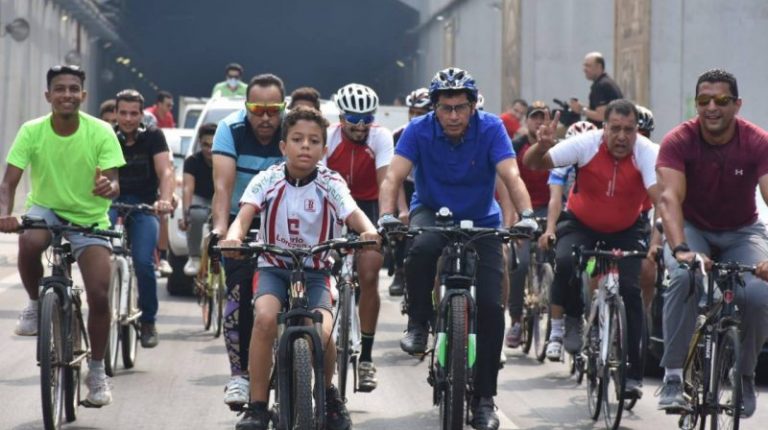 A group of young Egyptians and several ministerial officials also participated in the marathon.

Sobhy praised the Port Said Tunnels project, a national development project that has taken place under the leadership of President Abdel Fattah Al-Sisi. He further pointed out that his ministry has held various events with the aim of introducing young people to projects being implemented across Egypt.

He noted that Ministry of Youth and Sports projects are being designed to help leverage sports as a tool promoting cities and new projects.

The minister further noted that his ministry is keen on promoting a sports culture in Egypt, which introduces sports as a healthy lifestyle. The minister noted that this forms one of the major pillars in the ministry’s strategy of improving general health.

It is set to take place through various sporting events and marathons that will be periodically organised across the country.

Sobhy further stressed the importance of sports, and the positive presence they play in the lives of citizens.

Sobhy also referred to the “Your Bike … Your Health” initiative, which has recently been implemented by his ministry, to provide bicycles to Egyptian citizens at subsidised prices.

Two phases of the initiative have been implemented so far, with the ministry currently working on launching a new phase that includes a larger number of bicycles. The increase in equipment available is to meet the interest in subscribing to the intiative.

The minister pointed out that the initiative is being run under the auspices of President Al-Sisi, an affirmation of the country’s keenness to encourage the practice of sports. He emphasised that taking part in sports activities improves physical fitness, with bicycles in particular also representing an economically-efficient mode of transport.

Sobhy noted that the Ministry of Youth and Sports considers the promotion of sports is an integral part of the ministry’s work. The agenda is aimed at all groups of society, and will see the implementation of programmes improving citizen health through sports.