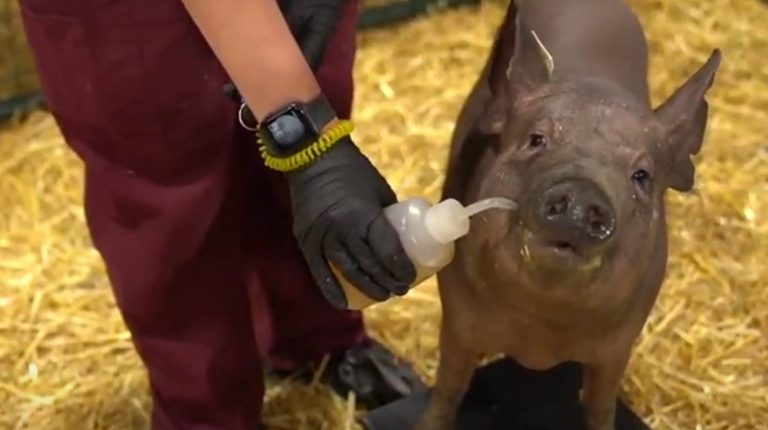 “The main purpose is to convince great people to come work at Neuralink and help us bring the product to fruition, make it affordable and reliable and such that anyone who wants one can have one,” Musk said during the demo while presenting a coin-sized wireless device.

The Tesla and SpaceX CEO brought three pigs to the demonstration. One pig was untreated, the second had been installed with a Neuralink device called the “Link” for two months. The third pig had previously had one device installed but then removed in order to show the safety and replaceability of the technology.

Musk stressed that the third pig showed the feasibility to provide updates to the hardware over time as better versions become available.

He noted that Neuralink had changed the design since last year to make the physical device small enough to be hidden under hair after being installed in the skull.

Musk then demonstrated a display that could play a sound and show a visual spike when the device detected the pig with the “Link” touch something with its snout.

“For the initial device, it’s read and write in every channel with about 1,024 channels, all-day battery life that recharges overnight and has quite a long range, so you can have the range being to your phone,” Musk said.

Musk considered the function very important, for it can be used to connect the “Link” in one’s head to applications on the smartphone by Bluetooth.

Neuralink was founded in 2016 and funded primarily by Elon Musk to develop a new kind of interface technology between the human brain and computing devices.

Installing a chip in the human skull could restore limb function, improve human movement, resolve issues with eyesight and hearing, and help with diseases like Parkinson’s, the company claims.

Musk said during the presentation that the company had received a “Breakthrough Device” designation from the U.S. Food and Drug Administration in July, and the company is “preparing for first human implantation soon, pending required approvals and further safety testing.”

The clinical trial will focus on individuals with paraplegia or tetraplegia, resulting from cervical spinal cord injury. The company plans to enroll a small number of patients first to test the efficacy and safety of the technology.