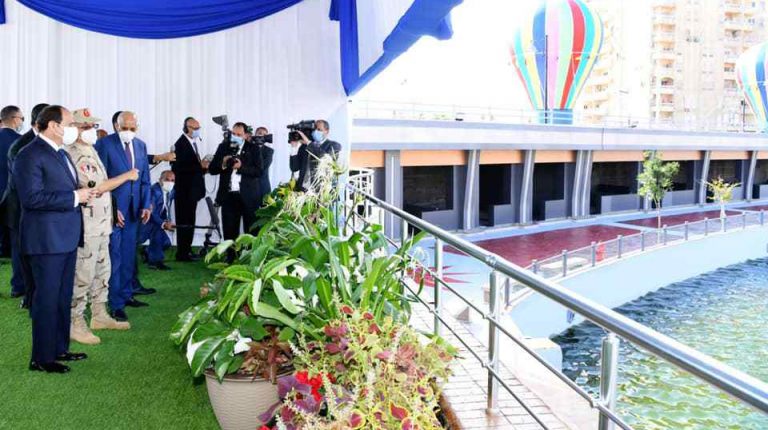 The Egyptian state will not be absent itself again, and instead will continue to pursue development and reform work, President Abdel Fattah Al-Sisi has said during the inauguration of several national projects on Saturday.

President Al-Sisi also said that development will be postponed “for a period of 100 years” should the state absent itself, which is unacceptable.

He said that the projects undertaken by the Egyptian state are in the interests of the country’s citizens. The President stressed that there are those who question such projects, and talk about them negatively to create and spread frustration.

Other projects in Alexandria inaugurated on Saturday by the President include several in the oil sector, as well as the Bashayer Al-Khair 2 housing project, and a triple sewage treatment plant in Borg El-Arab.

The inauguration was attended by Parliamentary Speaker Ali Abdel-Aal, Prime Minister Mostafa Madbouly and a number of ministers and military leaders.

During the inauguration, Madbouly said that Egypt’s Vision 2030 aims to place the country in the ranks of the world’s developed countries.

He added that the Egyptian state has launched and is working along two important axes in parallel to each other, to achieve the end goal. The first of these axes is working towards doubling Egypt’s inhabitable area to accommodate the expected population increase and address gaps and densities in many cities and places.

Madbouly explained that large national projects have been established to serve this goal, including building new cities, reclaiming agricultural lands, and developing main roads to link these projects together. He pointed out that this aspect was the easiest to achieve, as there was enough vacant land on which to develop.

“We are talking about developing sectors that affect the lives and movement of citizens, in which we have implemented investments of approximately EGP 1.4trn over 6 years,” Madbouly said, “These are the sectors of petroleum and its products, drinking and wastewater, roads and other road networks, and supply.”

Madbouly added, “The second axis is the most difficult, as it lies in the development of the existing urbanised areas, in which tens of millions of citizens already live.”

He explained that many villages across the country have fallen prey to neglect and deterioration in many ways. The Prime Minister noted that this was in no small part due to the long-term lack of continuous development and the failure to keep pace with the large population increase,

The Prime Minister noted that the Al-Mahmoudiya Axis project inaugurated on Saturday cost a total of EGP 11.5bn. He added that the volume of investments in the oil and mineral resources sector has exceeded EGP 1.16trn in more than 159 projects, of which 115 have been implemented the remaining 44 are being implemented.

The project will provide a new traffic artery in Alexandria, Egypt’s second city and the country’s main port, and is set to help reduce traffic congestion in the city. It is also set to redevelop the Mahmoudiyah Canal area, which has for many years been neglected, whilst also redeveloping and improving the surrounding areas.

The project has provided 15,000 direct job opportunities and 25,000 indirect job opportunities, whilst also raising production efficiency, water quality and pressure in networks. It has done much to improve water pressure weakness and interruption in water services across the Alexandria Governorate. The area was also seen as a prime target for rehabilitation due to the several important factories in the area and for the city’s future expansion.

Al-Sisi had issued a directive, in February 2018, to accelerate the finalisation of current projects, such as the Al-Mahmoudiya Axis and the Bashayer Al-Kheir housing project in Alexandria Governorate. The presidential directive came during the inauguration of the first phase of a project to establish greenhouses, on an area covering 100,000 feddan, in Matrouh governorate.

The Al-Mahmoudiya Axis extends for about 23 km, and has been linked with the international coastal road. It includes between six and eight traffic lanes in each direction, with the axis serving four neighbourhoods, namely the Al-Muntazah First, East, Central, and West areas.