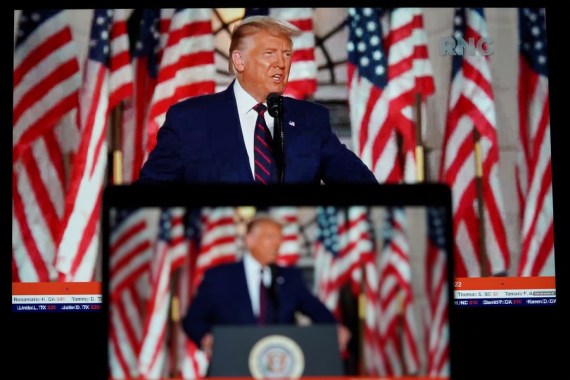 US President Donald Trump hit the campaign trail on Friday by holding a rally in Londonderry in the northeastern state of New Hampshire, a day after accepting the Republican Party’s nomination for reelection.

Speaking to supporters at an airport, Trump again laced into his Democratic rival, Joe Biden, while lashing out at demonstrations calling for social justice that have at times turned chaotic and violent.

George Floyd, a 46-year-old African American, died from asphyxiation after a white police officer kneeled on his neck for nearly nine minutes during an arrest in Minneapolis, Minnesota, in May. His death sparked massive demonstrations against police brutality and racism, as well as social unrest in some U.S. cities.

Biden, in a statement on Friday, accused Trump of “bringing his message of division, lies, and chaos to New Hampshire.”

“They are not protesters. Those are anarchists, agitators, rioters, looters,” Trump said. “It has nothing to do with George Floyd. They have no idea who he is. If you ask them ‘Who’s George Floyd?’ they say ‘I don’t know.'”

In 2016, Trump lost the Granite State to Democratic presidential nominee Hillary Clinton by fewer than 3,000 votes. His campaign has identified the state as a flip opportunity for him as it faces limited options to expand the electoral map.

Pence made campaign stops in the states of Minnesota and Michigan on Friday afternoon.

Biden said on Thursday that he will begin traveling to the battleground states after Labor Day, including Wisconsin, Minnesota, Arizona, and Pennsylvania.