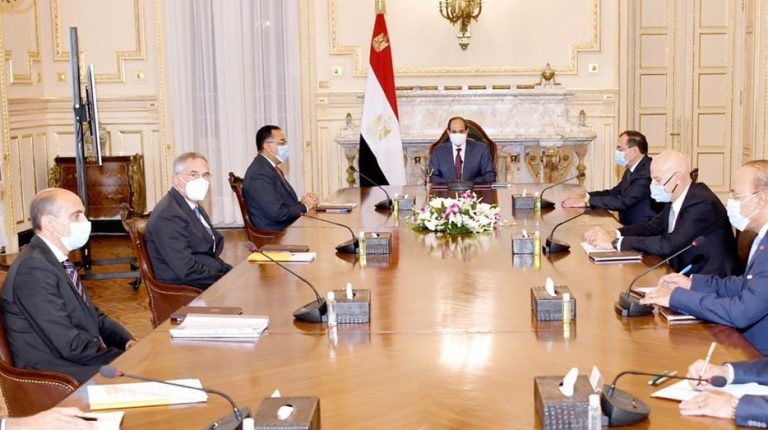 President Abdel Fattah Al-Sisi met with Claudio Descalzi, CEO of the Italian oil and gas company Eni, on Sunday, to discuss means of increasing cooperation between Egypt and the company.

Prime Minister Mostafa Madbouly and Minister of Petroleum and Renewable Energy Tarek El Molla were also present at the meeting.

During the discussions in Cairo, the president hailed the fruitful cooperation between the two sides, and expressed support for the company’s continued expansion of investments in its Egypt-based exploration and production.

Al-Sisi urged the company to take into account the state’s meticulous commitment to implementing projects nationwide, as well as its interest in developing its vital oil sector.

He directed the government to continue intensive cooperation with Eni, and remove any obstacles that the company may face in its work in Egypt.

For his part, Descalzi expressed his appreciation and gratitude for Egypt’s support of Italy during the novel coronavirus (COVID-19) pandemic.

He further praised the successful precautionary measures taken by the government at Egypt’s various oil and gas production projects. He noted that the measures enabled Egypt to continue work in these fields, and maintain production at full capacity.

Descalzi said that Egypt is an important partner for the Italian company’s international activity. He also said that he is looking forward to the continued development of the company’s activity in the country in the fields of exploration and production, especially in the Western region and the Red Sea.