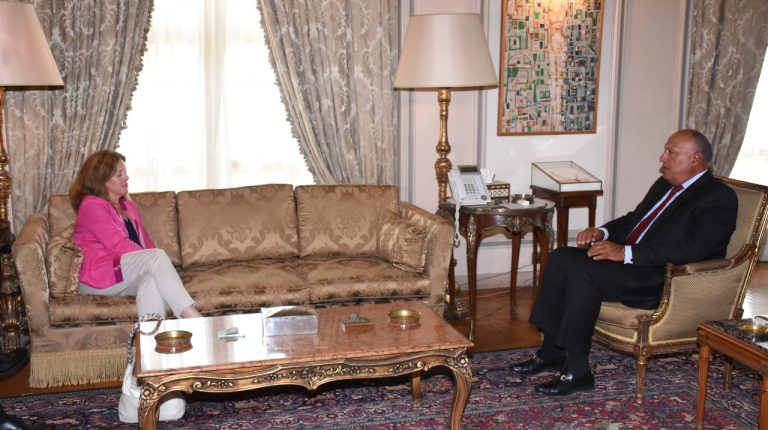 Egypt’s Minister of Foreign Affairs Sameh Shoukry received, on Sunday, the Acting Special Representative of the UN Secretary-General to Libya Stephanie Williams, for discussions on the latest developments in Libya.

During the discussions, the two sides discussed the UN Support Mission in Libya’s (UNSMIL) vision for a political settlement in Egypt’s war-torn neighbour.

Ministry of Foreign Affairs Spokesperson Ahmed Hafez said that the meeting dealt with the recent developments in Libya, and the opportunities for reaching a  political solution to the crisis there.

Shoukry stressed Cairo’s support for steps that would encourage a political settlement in Libya that would achieve security and stability for its people, Hafez said. He added that Egypt welcomed the latest statements from both sides in the conflict regarding the ceasefire and early presidential and parliamentary elections.

Hafez noted that Shoukry briefed Williams on the Egyptian position in support of a political solution preserving Libya’s unity and territorial integrity. He added that Shoukry also asserted the importance of the Cairo Declaration during the meeting.

The country’s warring rival administrations separately announced, on Friday, that they would cease all hostilities and hold nationwide elections.

The surprise announcement was made by Fayez Al-Sarraj, head of the UN-recognised GNA, and Aguila Saleh, speaker of the eastern-based parliament, backed by Commander Khalifa Haftar of the Libyan Arab Armed Forces (LAAF).

The two sides agreed on the importance of further developing the joint call for a ceasefire, declared earlier in the month by the two rival governments in Libya, the Arab League said in a statement.

Aboul-Gheit reiterated the pan-Arab organisation’s position regarding a comprehensive settlement of the Libyan crisis. He noted that this would occur through the resumption of negotiations to reach a permanent ceasefire in Libya under UN sponsorship and supervision, the statement added.