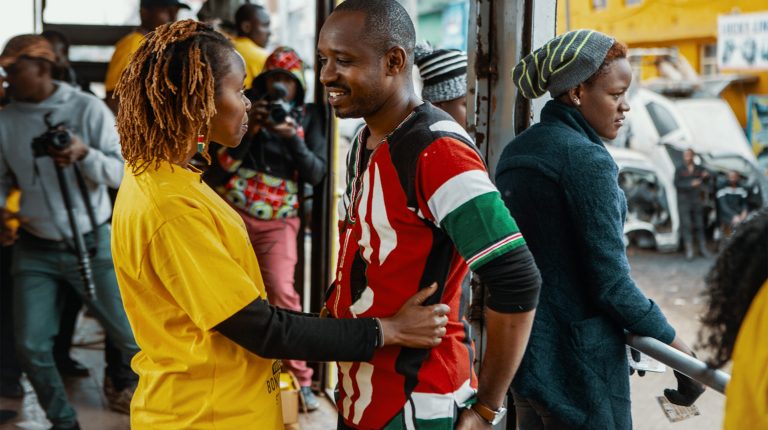 In his debut feature film, entitled Softie, the Nairobi-based Kenyan director Sam Soko details a snapshot of politics in his country over the last 13 years.

The hard-hitting film offers insights on the country’s sometimes bloody history of colonialism and tribalism, and how the aftershocks reverberate even today. But Soko magically pulls these many and varied strands, following photographer, budding politician and political activist, Boniface ‘Softie’ Mwangi.

The images of Softie are sometimes difficult to watch, and certainly not for the faint hearted. Much blood is spilled, and viewers are treated to shots of pigs painted with bright red words, and protesters in front of a parliamentary building.

Viewers are almost not allowed to escape from the eventual descent into chaos, witnessing police officers hitting protesters with sticks and tear gas. The political situation is intense, and spills over into the private lives of all those involved in the situation.

Mwangi finds his life at risk and his young family threatened. His wife, Njeri, wants him to focus on his responsibilities as a husband, and as a father to their three children.

But for Mwangi, “the revolution comes first, then love follows”. His family eventually flees to the US for their safety, but, as with almost anything of this type, everything has its price.

From Njeri’s perspective, Softie reveals what it must be like to be married to a controversial figure, and the sacrifices she has had to make living in her husband’s shadow whilst he follows his political ambitions.

Soko’s film deftly blends the personal with the political, and presents the Mwangis’ story as a universally relatable chronicle of a family striving for a better future, for themselves and their country.

Soko’s direction is assured, boasting a thrilling mix of snappy edits, energetic music and archival footage of politicians preening for the cameras. The crew throws itself into the mix of Mwangi’s unpredictable life, trailing him as he leads protests and constantly puts himself in harm’s way.

Despite the nickname Softie, Mwangi’s activism seems borne out of a need to rebel against the name even as he has embraced it as part of who he is. Soko’s Softie is a bold, fitting portrait that embraces Mwangi’s many contradictions, presenting its subject as full of courage under fire.

This story emanates from the Talent Press, an initiative of Talents Durban in collaboration with the Durban FilmMart. The views of this article reflect the opinions of the film critic, Mohamed Tarek. The Durban Talent Press 2020 is mentored by Djia Mambu and Wilfred Okiche.