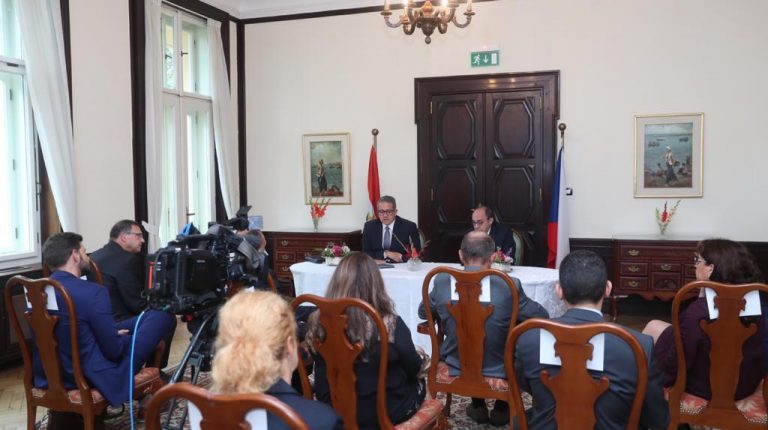 About 150,000 tourists have visited Egypt’s tourist cities of Sharm El-Sheikh and Hurghada since the resumption of inbound tourism on 1 July, according to Minister of Tourism and Antiquities Khaled Al-Anani.

The minister revealed that those visitors have come from Ukraine, Belarus, Switzerland, Hungary, and Serbia.

He stressed that they have all spent a happy time in Egypt, with tourists always praising the health and safety measures applied in the country which did not negatively affect their visit.

Al-Anani’s remarks came during his meeting with the President of the Federation of Tourism Companies in the Czech Republic, as well as representatives from major tour operators and airlines in the east European country. The meeting came on the sidelines of Al-Anani’s current visit to the Czech capital, Prague, for the official opening of the archaeological exhibition “Kings of the Sun”.

The minister started the meeting by reviewing the precautionary measures and health and safety controls that Egypt has taken to ensure tourists and Egypt’s tourism sector workers remain safe. He highlighted that Egypt resumed inbound tourism, starting on 1 July, to three governorates as a first stage, namely the Red Sea, South Sinai, and Matrouh.

Al-Anani indicated that cultural tourism will resume in Egypt as of this coming Tuesday, and pointed to the richness and diversity of the country’s tourism products. He added that they attract different tourist segments and satisfy all tourist tastes, including cultural, beach, recreational, and conference tourism.

The minister stressed the importance of the Czech market as one of the most promising tourist markets for Egypt. He noted that Egypt as a tourist destination saw significant growth in tourism movement coming from the East European country, as about 300,000 Czechs visited Egypt in 2019.

Al-Anani added that the Egyptian government’s decision to impose a PCR test on all inbound foreign travellers and tourists is a precautionary measure aimed at preserving all tourists and tourism sector workers.

The minister also reviewed the incentives granted by the state to encourage major international tour operators to organise trips to coastal tourism governorates. The most important of these incentives was the abolition of tourist visa fees for foreigners arriving in the tourist governorates, valid until 31October 2020. This is in addition to extending the current flight incentive programme until 29 October 2020, and granting airlines 50% discounts on landing and accommodation fees. The government has also introduced a 20% reduction in fees on ground services provided for direct flights to tourist governorate airports, valid until October 31, 2020.

Czech tour operators referred to their customer demand and desire to travel to Egypt due to its various attractions, and its great diversity in its tourism products. They pointed out that Czech tourists prefer to visit the cities of Marsa Alam, Hurghada, and Sharm El-Sheikh to enjoy beach tourism.