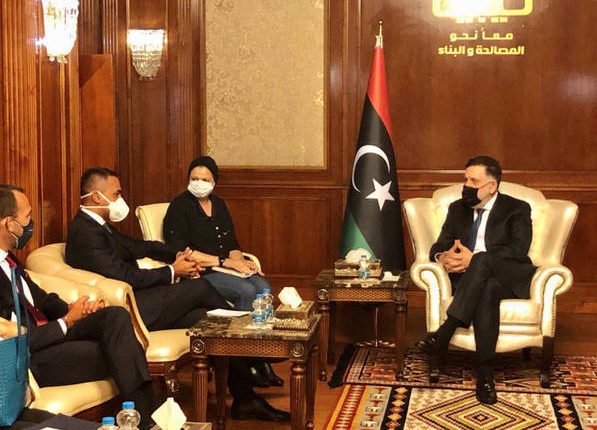 Italy’s Minister of Foreign Affairs Luigi Di Maio visited the Libyan cities of Tripoli and Tobruk, on Tuesday, to meet with the heads of Libya’s warring sides, according to Italian news agencies ANSA and Nova.

Starting his Libya visit in the capital, Tripoli, Di Maio met with Fayez Al-Sarraj, Head of the Government of National Accord (GNA).

“Libya is an important player for us, and a crucial partner for building a new model of development in the Mediterranean, with flourishing trade and growth opportunities for all countries in the area,” Di Maio stressed during the meeting, ANSA reported.

The minister also voiced his support for the coordinated ceasefire between Al-Sarraj and Libyan Parliamentary Speaker Aguila Saleh, adding that “all external interference must stop”.

Al-Sarraj said that he encouraged Italian businesses to come to Libya to support the war-torn country’s development and growth.

Di Maio is set to meet later with Aguila Saleh in Tobruk, as he is expected to discuss “a large trade and industrial file” as well as the recent ceasefire deal, Nova reported.

Also on Tuesday, the European Union’s (EU) Minister for Foreign Affairs, Josep Borrell, met with Al-Sarraj in Tripoli to discuss ways forward in the political process. During the meeting, the two sides also discussed the return to 5+5 military committee talks, and to lift the oil blockade.

“Libya remains a top priority for EU. We welcome recent ceasefire understanding and continue to support dialogue and Libyan-led political resolution to the conflict,” Borrell added.

Di Maio’s visit comes only a few days after the GNA’s suspension, on Friday, of Minister of Interior Fathi Bashagha from his duties. Bashagha was also referred to an administrative investigation, amid protests against deteriorating economic conditions.

According to Nova, Di Maio wants to seek clarification, during his visit to Libya, of the circumstance behind Bashagha’s suspension. The influential Libyan politician enjoys the appreciation of the GNA’s international supporters.

Nova cited sources from within the GNA, who said that Bashagha would return to work after mediation led by GNA officials and military commanders in Tripoli and Misrata. These have been organised to calm the dispute between Bashagha and Al-Sarraj.

On 21 August, Al-Sarraj and Saleh announced a ceasefire in Libya, and called for parliamentary and presidential elections. The truce, which has come amidst a military mobilisation by the parties involved in the conflict around the strategic Libyan city of Sirte, followed months of escalation and fighting.

Misr Italia Properties to invest EGP 68bn in Egypt over next 15 years: CEO