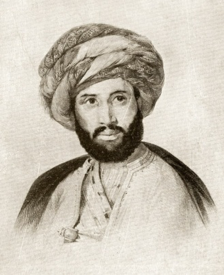 The Egyptian interest in the River Nile’s sources during its golden age in the 19th Century (see the first part of this op-ed series in the Daily News Egypt) could only achieve its goals through relying on a diverse group of earth scientists including geographers, geologists, botanists, surveyors, and astronomers.

Following Muhammad Ali’s rise to power in Egypt in the first half of the 19th Century, Egyptian-led geographical discoveries and military conquests multiplied.

This geographical and military momentum relied on two types of expert help.

The first type was represented by prominent figures in the Alawite family who had led the military campaigns themselves, and included, in the first half of the 19th century, Muhammad Ali Pasha himself, and his sons, mainly Tosson, Ibrahim, and Ismail, along with his son-in-law Muhammad Bey Al-Daftardār.

In the second half of the century, Egypt also relied on home-grown officers, who would have had their names and work immortalised, if the method of local documentation and archiving had been done with the same authentication methods found abroad. Unfortunately, this type of Egyptian pioneers was not mentioned, except in rare occasions.

The second type of masterminds were those foreign experts who came to Egypt with Napoleon’s French campaign (1798-1801), and later the Fraser campaign (1807) which was part of the Turkish-English war (1807-1809).

Muhammad Ali eyes were suddenly opened to the opportunities presented by those experts including military personnel, surveyors, sailors, explorers, and scholars. Muhammad Ali and his successors figured the importance of seeking the assistance of this foreign input, particularly as Egyptian scientific expertise during that period was weak following the Mamluk rule.

Those foreign experts were able to reap the benefits of fame through printing and publishing their works in Egypt and abroad, and as a result, having their names feted far more than those of their Egyptian counterparts.

In addition to the previous two types of experts, we can also refer to rare instances when exploring missions and campaigns gathered both Egyptian and foreign pioneers at the same time. Those campaigns were, perhaps, the most useful type of all for exchanging expertise, despite their scarcity.

We can identify nearly 100 personnel of those travellers, explorers, geographers, and irrigation experts who helped Muhammad Ali Pasha and his successors. It should be noted that those people were not necessarily, as it is rumoured, of French origin due to the Turkish-French alliance at the time. They included also Italians, English, Germans, and even some Russians and Americans. 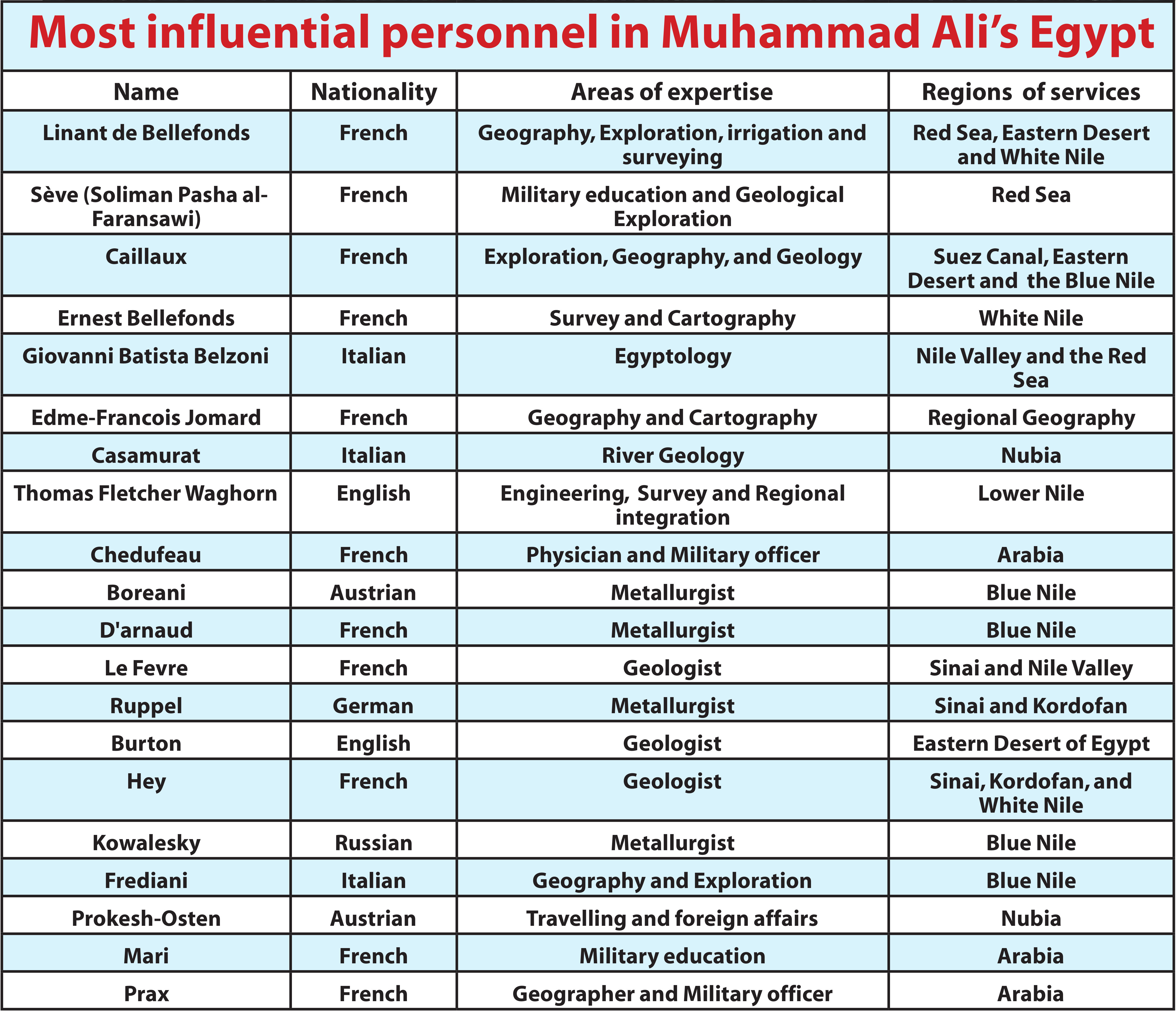 More than 45% of this figure was interested in regional geography, anthropology, and regional chorography, while about 30% was involved in mining work. The remaining experts were interested in antiquities, astronomy, surveying, irrigation, and military training.

The use of foreign experts varied, with their knowledge directed to achieve five main goals during the first half of the 19th Century, namely:

1. Military geography as a prelude to campaigns seeking to extend Egypt’s control and sovereignty, and those extended to the Arabian Peninsula, the Levant, the Libyan Desert, and Sudan. The experts here included military officers, endemic pathologists, and military training instructors.

2. Mineral exploration in Egypt, especially to find the sulphur ores which were necessary for gunpowder. They were found in Egypt’s Eastern Desert. The exploration also included gold ores that the Egyptian budget was in dire need of. Here, the campaigns headed to Sudan and the outskirts of Abyssinia (modern-day Ethiopia), whilst also undertaking exploration work in Sinai, before they despaired of finding any gold in the El-Tor Mountain area.

3. Activating trade between Egypt and other African countries, to secure the former’s needs of certain goods and products that were not available in Egypt at the time.

4. Compulsory recruiting of soldiers from distant regions, especially those tough men in the Nile Basin region, during the reign of Muhammad Ali, before Egypt abolished the slave trade and stopped human trafficking, under European pressure, during the era of Muhammad Ali’s successors. The slave trade is one of the issues that affected the supposed friendly relations between Egypt and other Nile Basin countries, and made the common hope for integration in the modern era difficult.

5. Cleansing the course of the River Nile and its tributaries, to ensure the flow of navigation, monitor the security situation, and prevent European competition, particularly from England, later France and Italy, in the Egypt-controlled areas in the Nile Basin.

Analysis of the historical context in that period reveals three main motives that drove foreign scientists and scholars to work in Egypt:

This does not mean that the fate of these scholars, in which they would claw their way to money and fame, was always secure. For some, their lives ended tragically, as some of them became mentally ill (like Frediani), others were killed at the hands of the locals (like Ernest Bellefonds, son of Linant de Bellefonds), or were killed whilst on exploration trip (like Pacho), and yet others were struck down by diseases and illnesses. The most well known of those to die of fever was the navigation engineer Casamurat, who caught fever in a Blue Nile area, and when he sought treatment, barely reached Khartoum before passing away in September 1826.

The least doomed scientists were cursed and rebuked by Muhammad Ali if they failed in their missions, and they were consequently prevented from any privileges or gifts, and sometimes expelled.

Of course, there was also a state of semi-monopoly on information carried out by the foreign scientists and experts. There are historically proven cases in which the work of Egyptian experts was ridiculed and minimised.

Perhaps we should highlight the famous example of Frenchman Linant de Bellefonds and Muhammad Bey Al-Daftardār, when the latter refused to be accompanied by foreigners on a purely Egyptian campaign to Kordofan (in Sudan). The Egyptians returned with data on the local population, their customs, and traditions; the most important crops in the area; possible means of trade with the locals; and maps of the trip. But when Muhammad Ali presented those findings to the European experts, they mocked them.

“These are low-value maps that contain only roads and paths, something that reminds us of the maps of the Roman era hundreds of years ago,” wrote Linant de Bellefonds.

There is no doubt that foreign experts had a remarkable superiority in geography that was not comparable to their Egyptian counterparts.

We have, for example, Rifa’a Al-Tahtawi who focused on geography within the limits of translation. Perhaps the most prominent of those translations into Arabic was a book by the French geographer Conrad Malte-Brun. It must be said that the translation by Al-Tahtawi reveals, in fact, the modesty of his geographical knowledge by the standards of that time. This may be evidence of the weakness of Egyptian geography education, which prompted Muhammad Ali later to make geography one of the main education subjects at the Al-Alsun school in 1832, which was headed by Al-Tahtawi himself.

In conclusion, we must look objectively at what was gained during the period in which foreign experts worked in Egypt during the first half of the 19th Century. It brought many benefits to geography and exploration in Egypt and Sudan, and provided opportunities that were not available to the Egyptians during that period, including drawing maps or writing scientific literature which contributed to the growth and expansion of the Egyptian state.

But on the other hand, we cannot overlook the European occupations in the last part of the 19th century, whether it was the British in Egypt and Sudan, the French in the Middle and Horn of Africa, or the Italian in Libya and Abyssinia. The activities of these foreign powers could not have been achieved were it not for the efforts of the previous decades’ exploration campaigns, that included foreign experts who carried out their works and maps under the care and protection of Muhammad Ali and his successors. Actually, all these efforts were carried out with massive funds from the Egyptian state budget, which was ultimately poured into the interests of European colonialism, which occupied the African continent and controlled the sources of the Nile and divided the region.

Read part I of the series “Historical maps of Egypt (Part I): The Golden Age of Egypt’s interest in the Nile”