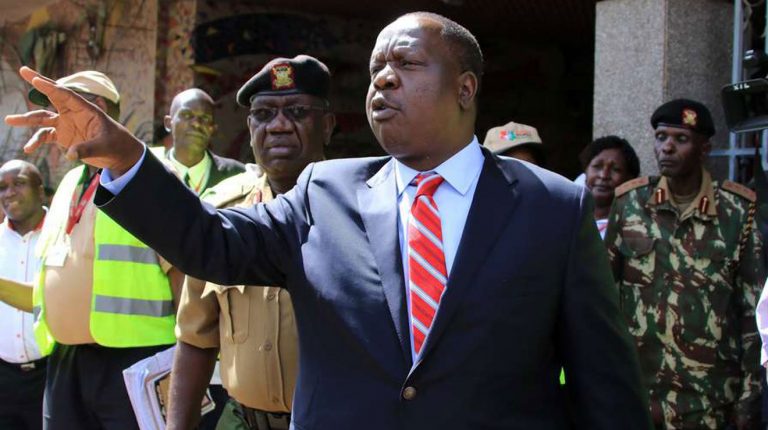 The Kenyan government on Wednesday ordered the immediate freezing of funds and property attached to nine Kenyans, alleged to finance al-Shabab terror activities in the country and Somalia.

“I order the freezing of funds and property of the individuals and entities,” Matiang’i said in a statement issued in Nairobi.
The suspects are businessmen and women based in Nairobi’s Eastleigh residential estate largely inhabited by majority ethnic Somali but some operate in Mombasa and Mandera.

The police said the nine suspects have been running mobile money transfer service, Mpesa shops in the said areas.
Matiang’i said the nine had been identified as key in bankrolling the terror group which has conducted several attacks in both Kenya and Somalia, killing thousands and destroying property.

The names are listed alongside the IDs and passport numbers. Matiangi noted it was necessary to deny the terrorists the means of threatening lives by “choking their facilitation networks”.

“As part of our comprehensive counter-terrorism strategy, we continue to disrupt terrorist operations with a sole focus on bringing to book the perpetrators, financiers and sponsors of these reprehensible acts in line with our national laws and international obligations,” he said.

Matiang’i said the move to freeze the assets was the latest step on the individuals as he stated the government will not relent or hesitate to subject any individual or entity seeking to harm Kenyans to the full force of the law.

“The enemy is progressively planting operatives among civilians strategically to advance his agenda through recruitment and radicalization to violent extremism and terrorism,” he said in a statement.

The police say al-Qaida allied terror group, al-Shabab has long-established finance networks in the region to run its operations which have spread beyond Somalia into the East Africa region.

“We shall neither surrender into the hands of terrorism nor play into the narrative propounded by terrorists of discrimination along ethnic and religious lines in this war. The only way to deny terrorists the means to threaten our way of life is to choke their facilitation networks,” Matiang’i added.

The move comes in the wake of heightened operations in Mombasa and the northern part of the country whereby almost a dozen suspects were held, questioned and released.

The east African nation has been a regular target for al-Shabab since it sent troops into Somalia to fight it in 2011.