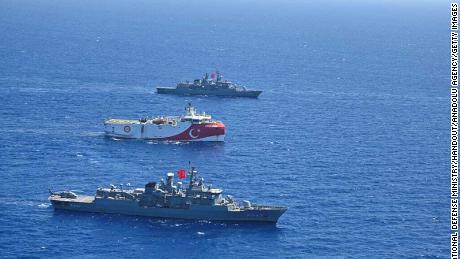 US Secretary of State Mike Pompeo announced, on Tuesday, that the US has temporarily lifted restrictions on the sale of non-lethal defence articles and services to Cyprus for fiscal year (FY) 2020/21.

The decision was firmly criticised by Turkey, a traditional ally of the US, which has said it will take steps to respond the US move.

The US decision comes amid an ongoing dispute in the Eastern Mediterranean over many issues between Turkey on the one side, and Greece and Cyprus on the other.

“The US is temporarily waiving restrictions for FY 2020/2021on the export, re-export, retransfer, and temporary import of non-lethal defence articles and defence services controlled under the International Traffic in Arms Regulation (ITAR) destined for or originating in Cyprus,” Pompeo said in a phone conversation with Cypriot President Nicos Anastasiades.

For its part, Turkey’s Ministry of Foreign Affairs criticised the US decision to lift the arms embargo against the “Greek Cypriot Administration.” The ministry described the move as “ignoring the equality and balance between the two peoples on the island,” and will also have negative effects on the efforts to reach a settlement to the Cyprus issue.

Cyprus has been divided into two parts since 1974, forming Turkish Cyprus on the northern third of the island, and Greek Cyprus in the southern two thirds.

“In a time, where efforts are spent to reduce the tension in the Eastern Mediterranean, the US’s approval of such a decision, which poisons the peace and stable environment in the region, does not comply with the spirit of alliance,” Turkey said.

Ankara called on the US to reconsider the decision “otherwise, Turkey, as a guarantor country, will take the necessary decisive counter steps to guarantee the security of the Turkish Cypriot people, in line with its legal and historical responsibilities.”

Ankara and Athens have recently reignited their long-term conflict, after both sides took steps to demarcate their maritime borders. Both countries accuse the other of violating borders.

The main conflict revolves around the region’s gas resources, which has also attracted the attention of Cyprus, Israel and Egypt, aiming to be a regional energy hub for the strategic article.

Turkey said it will continue its operations for searching for gas in the area of eastern the Mediterranean, however, the EU announced it would impose sanctions on Ankara if it continued drilling.

Both Turkey and Greece are members of the North Atlantic Treaty Organization (NATO), which has called on both sides to start dialogue.