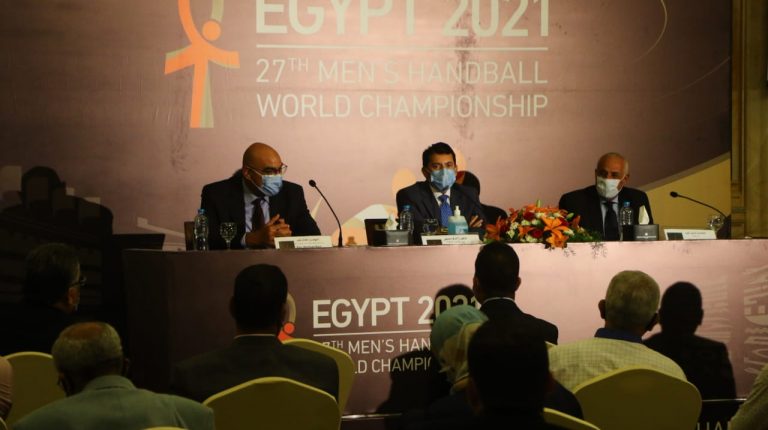 Egypt’s Minister of Youth and Sports, Ashraf Sobhy, announced the details for the 2021 World Men’s Handball Championship draw ceremony at a press conference on Tuesday.

The draw for the 27th edition of the championships is set to take place on 5 September at the foot of the Pyramids in Giza. The competition, itself, is scheduled to be held in Egypt in January 2021.

Sobhy expressed his thanks and appreciation for President Abdel Fattah Al-Sisi’s significant support and guidance during preparations for the international competition.

He noted that the president’s support was befitting of Egypt’s international and historical stature. The minister also thanked Prime Minister Mostafa Madbouly, who chairs the tournament’s Supreme Organizing Committee, for his great interest in all the details of the event.

Sobhy reviewed the latest developments related to the construction work on the halls and facilities that Egypt will use to host the tournament. He noted that over 88% of the total EGP 3.2bn in funds set aside for the championships’ preparation work has already used.

The minister stressed the need to implement precautionary measures and an immediate follow-up with the medical committee and organising committee as soon as teams arrive for the draw ceremony.

This would also cover accompanying delegations and visitors to the World Cup draw ceremony on 5 September, in order to preserve the health and safety of all participants.

Sobhy revealed a set of precautionary measures that will be followed during the tournament, given the ongoing novel coronavirus (COVID-19) pandemic. Foremost of these will be thermal screening, wearing face masks, avoiding crowds, social distancing, and using hand sanitizers.

There will also be procedures in place for dealing with positive cases that may appear during the championships. These are to be implemented in cooperation with Egypt’s Ministry of Health, which has shown its full cooperation and support to provide medical spaces for anyone entering Egypt.

The support includes all healthcare procedures, starting with airport arrivals, bus rides, trips, training in halls, as well as press conferences. This confirms the state’s determination to successfully export a positive image of Egypt to the world.

Regarding the scenarios for attendance at the tournament, Sobhy said that, while the matter is still under discussions, attendance could be 100% or 2:1. This would mean that audience members would need to leave a seat free between each other whilst attending matches.

The 2021 World Men’s Handball Championship is the first to be organised with as many as 32 teams participating. The last edition was also held in two countries, with the next championships to be staged in three countries, presenting Egypt with a unique set of challenges.

“The key word in achieving success in the tournament lies in the solidarity and cooperation of all from the state institutions, the Egyptian masses, and the International and Egyptian Handball Federations,” Sobhy said.

Hisham Nasr, Chairperson of the Egyptian Handball Federation, praised Sobhy’s significant role and his tireless efforts to ensure that all work for the championships is completed according to schedule.

For his part, tournament Director Hussein Labib confirmed that the tournament’s mascot, which was produced in a European country, has been completed and will be revealed at next Saturday’s draw ceremony.

The tournament will be held from 14 to 31 January 2021, and will be the first version to include 32 teams instead of the previous 24. The competition will be held across four halls in Cairo and Alexandria: the Cairo Stadium Hall; the New Administrative Capital Hall; the 6th of October City Hall; and the Borg El Arab Hall.

Egypt to offer exceptional aid to over 12,000 tour guides amid COVID-19