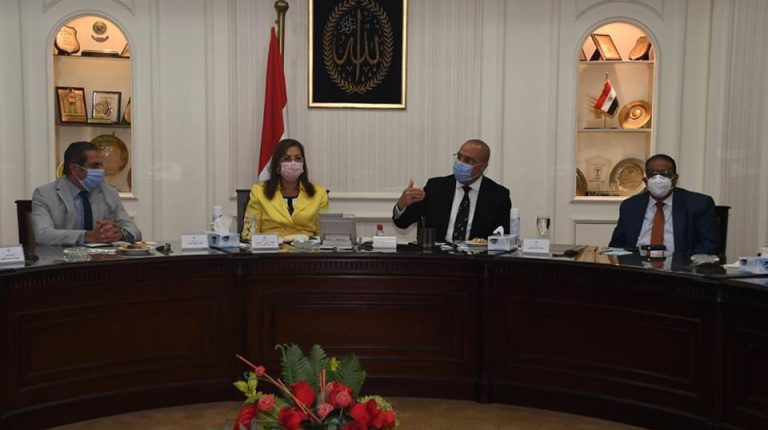 Egypt’s Minister of Planning and Economic Development and Chairperson of The Sovereign Fund of Egypt (TSFE) Hala El-Said, discussed the development of Khedivial Cairo, sewage treatment, and water desalination projects with Minister of Housing Assem El-Gazzar on Thursday.

The meeting was attended by Ayman Soliman CEO of TSFE and tackled ways to utilize the assets transferred to the sovereign fund in Cairo downtown, including the Tahrir Complex, which is among the first assets to be developed within the ambitious scheme for the Cairo Khedive District.

On Thursday, President Abdel Fattah Al-Sisi approved the ownership transfer of unexploited assets to The Sovereign Fund of Egypt (TSFE), including Tahrir Complex, old Ministry of Interior headquarters, and land-plot of disbanded National Democratic Party headquarters according to the Official Gazette.

El-Said said that (TSFE) will act as a general developer of these assets to restore the area to its splendour in partnership with international and local investors.

El-Gazzar stressed the need to choose the appropriate activities for the untapped assets of the state in the vicinity of Khedive Cairo, in line with the historical nature of the city.

TSFE CEO said that the fund will conduct studies to determine the best uses of the Tahrir Complex building ahead of inviting developers specializing in various fields of hotel, administrative and commercial activities of a special nature.

The meeting also tackled ways to expand water treatment and desalination projects in line with the directives of President Abdel Fattah Al-Sisi,

Soliman explained that TSFE is expected to participate through its sub-fund for utilities and infrastructure, in partnership with local and international investors.

Te project’s first phase aims to achieve desalination capacity of up to 14 million cubic meters of water per day, with EGP 30bn of investment.