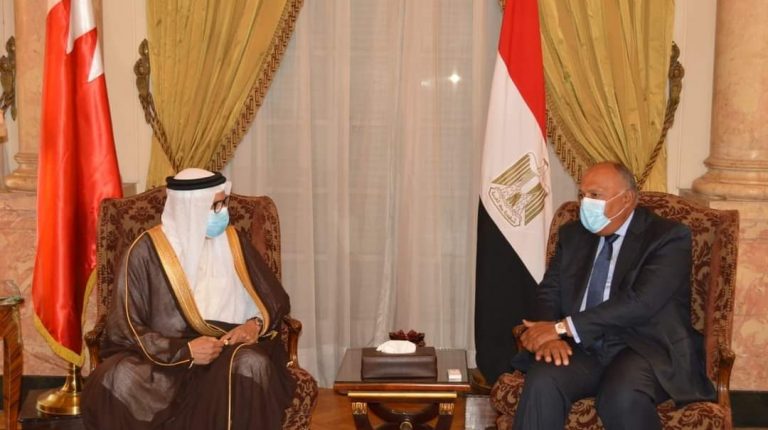 Both ministers also tackled several regional issues of mutual concern, including the Libyan crisis, where they agreed on the need to preserve the ongoing ceasefire in the war-torn country, and for the election of a new presidential council.

The two sides affirmed their support for a political solution that maintains Libya’s sovereignty and unity. They also discussed Libya’s needs in confronting terrorism and the destructive foreign interference, according to a communiqué issued by the Egyptian Foreign Ministry on Saturday.

During the discussions, both officials reviewed ways to intensify joint action aimed at enhancing stability in Egypt and Bahrain. This would occur with an emphasis on the two countries’ solidarity in facing foreign interventions aimed at undermining security and stability in the region.

Moreover, Shoukry expressed Egypt’s appreciation for the Bahraini government’s care for the Egyptian community resident in the GCC country during the recent novel coronavirus (COVID-19) pandemic. He also reaffirmed Egypt’s support for Bahrain, and the GCC region, in combatting any challenges and dangers that threathen its security and stability.

Al-Sisi hailed the distinguished relations between the two countries and people, and requested that the Bahraini minister convey his greetings to King Hamad bin Isa Al Khalifa. Al-Sisi highlighted his wishes for the further development of Bahrain and its people.

He conveyed the greetings of Bahrain’s ruling monarch to President Al-Sisi, whilst also highlighting the strategic role Egypt plays in consolidating regional security and peace.