The Aga Khan Mausoleum sits high on the west bank of the River Nile at Aswan, a hark back to Egypt’s former status as the centre of Fatimid power.

DNE Buzz takes us on a journey to the location that has witnessed one of the most famous love stories of the 20th Century. 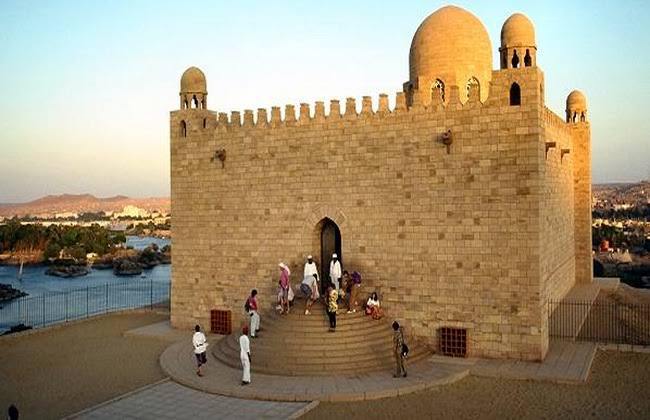 Sir Sultan Muhammed Shah, the third Aga Khan and the 48th Imam of the Nizari Ismaili sect, was born in Karachi, the then-capital of Sindh province in British India, now modern-day Pakistan.

He was one of the founders and the first permanent president of the All-India Muslim League (AIML).  As the 48th Imam of the Shia’a Nizari Ismaili sect, he aimed for the advancement of Muslim agendas and the protection of Muslim rights in India. In 1932 he was nominated to represent India at the League of Nations, and served as the league’s President in 1937.

The Aga Khan expressed that, following his death, he was to be buried near his villa in the Upper Egyptian city of Aswan, a city where he frequently spent the winter season. His deep love of the city stemmed from ill health, having been recommended to travel to Aswan following paralysis in one leg.

The Mausoleum, constructed following his death in 1957, is built in the style of the Fatimid tombs in Cairo. Its pink limestone exterior, in which the tomb of white Carrara marble sits, serves as a defining feature on Aswan’s landscape.

At first sight, the Fatimid styled Mausoleum seems an isolated building, but it serves as a romantic start point, encouraging lovers from all over the world to go explore the area. 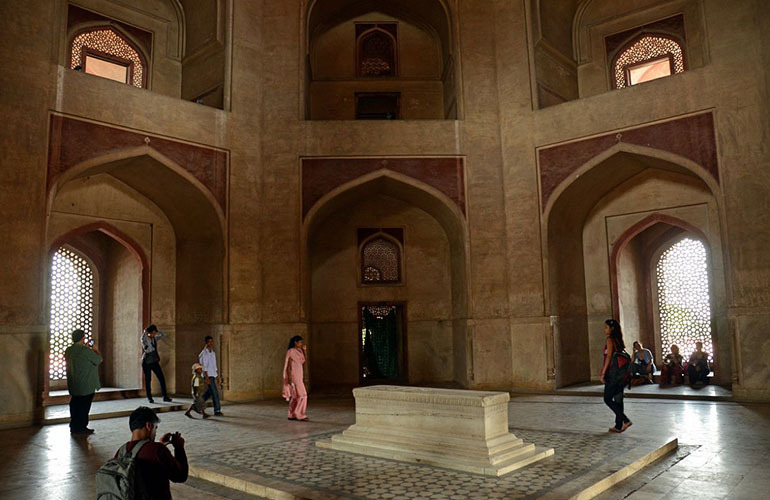 The Aga Khan’s love story started in the late 1930s, and ended in 2000, when destiny brought him together with a French woman named Yvonne Blanche Labrousse. The two met while attending a royal party in Egypt, to which Labrousse had been invited following her winning the Miss France title in 1930.

It is said that the then-68-year-old prince fell in love with the French beauty at first sight. And as with most stories of this sort, their love suffered from the constrictions of social norms and traditions at the time. The prince was heavily criticised for wanting to marry a florist, especially one thirty years his junior.

However, love knows no bounds and the couple were married one year later. Since then, Labrousse was known as Begum Om Habibeh Aga Khan, the prince’s fourth and final wife.

The couple preferred to stay in Aswan, where the Aga Khan prepared a palace for his wife to stay. It was in Egypt that the couple remained until his death in 1957.

It is said that  Begum Om Habibeh used to put a red rose inside a silver cup on his tomb every day until her own death in 2000, a practice that continues until the present day. She also planted the palace garden with the same roses that the Aga Khan preferred.

Begum Om Habibeh gained fame for her generosity towards the poor and the elderly, frequently undertaking acts of compassion to ensure their welfare. After her husband’s death, she returned to France, visiting Aswan annually to commemorate her late husband’s memory.

In 2000, Begum Om Habibeh died at the age of 94 in France, with her remains returned to Aswan to be buried by her husband’s side in the mausoleum.

Following her death, the mausoleum became a shrine for lovers due to its backstory reminding visitors of the never-ending love between the prince and his French florist.

The mausoleum’s beautiful interior features red carpets, with the building’s light colours giving it a certain timbre contrasting with the ethnic style.

The only way to reach the monument, located at Aswan’s southern end on the western side of the River Nile, is via sailing boat.

Unfortunately, the mausoleum is no longer open to the public, but you can still drink in the exterior beauty, and the building’s unique setting on the hills that rise above the River Nile. The added experience of navigating the surrounding waters are reasons enough to make a visit to this magical place in Egypt.