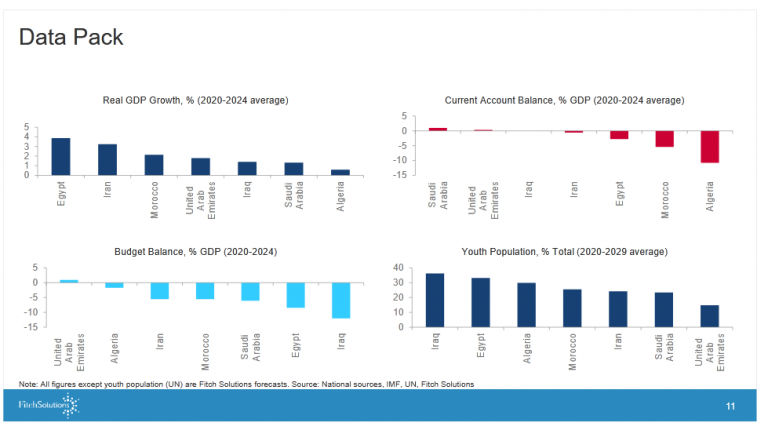 The Fitch report added that Egypt also has base labour costs that are comparable to its Asian competitors.

The agency added that North African country is geographically close to Europe, and has preferential market access to the US and EU. This could outweigh the country’s relatively high labour taxes and social insurance costs.

According to the report, Egypt has high labour availability, medium apparel manufacturing expertise, many trade agreements, and a medium transport network.

“Tunisia has low labour costs and a developed textile sector, though high political risk, a lack of raw input materials and a small working population could act as headwinds to its apparel production growth,” according to the report.

Fitch said that Jordan is politically stable, with strong ties to European suppliers and favourable transport regulation. That said, the high wages and Jordan’s reliance on imported fibres pose some headwinds to its apparel sector.

Morocco is already a large textile producer, but as the kingdom moves up the value chain, rising labour costs will likely inhibit further large-scale investment into its apparel sector.

Against this backdrop, Fitch Solutions expects the proximity of MENA countries and the preferential access to European markets, coupled with steady reform efforts, will boost the region’s competitiveness vis-à-vis other manufacturing hubs worldwide.

“Despite somewhat higher labour costs relative to Asian competitors, both textile and apparel production as well as mid-range machinery and electronics manufacturing will likely expand in MENA in the next few years,” according to the report.

On the lower-value-added end of the spectrum, Egypt stands out as a beneficiary of global supply chain diversification. Morocco, meanwhile, is well-placed to attract companies looking to near-source higher value-add products such as autos and electronics.

Egypt, Jordon, Morocco, Tunisia, and Algeria will benefit the most in the MENA region from global apparel supply chain diversification, the report noted.

Morocco, Egypt, and Saudi Arabia rank as the top three countries in the MENA region to benefit from global mid-range manufacturing diversification, according to the report.

It added that Egypt is also likely to make significant gains in mid-range manufacturing, given its favourable demographics and relatively low labour costs.

In addition, the report mentioned that Egypt has implemented key reforms in recent years. These include adopting new investment and bankruptcy laws, liberalising its currency, and adding momentum to growth prospects.

That said, the Egyptian mid-range manufacturing sector is still relatively underdeveloped. Electrical and mechanical machinery, alongside vehicles, account for less than a tenth of the country’s total exports.

Saudi Arabia enjoys a fairly large working age population and its government is pursuing an ambitious business reform agenda. Nevertheless, the kingdom still faces numerous headwinds to boosting manufacturing, such as a limited infrastructure base, skills mismatches, and cultural barriers that act as a disincentive for nationals to work in the private sector.

Fitch solutions forecasts that Egypt’s real GDP in 2020 will reach 2.6%, while Bloomberg expects 1.9%. Both Fitch and Bloomberg forecast Egypt’s inflation to reach 5.9% in 2020.