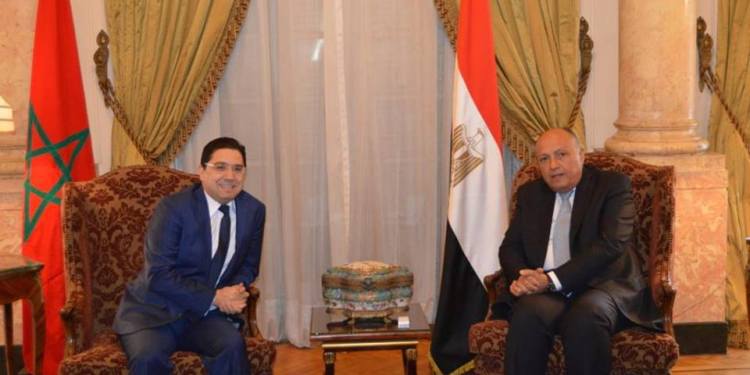 Egypt’s Minister of Foreign Affairs Sameh Shoukry held discussions with his Moroccan counterpart Nasser Bourita, on Monday, on the latest updates regarding the Libyan conflict.

During the phone conversation, the two ministers tackled the ongoing stabilisation efforts, which include a ceasefire, with the aim to achieve a comprehensive political settlement for the prolonged crisis.

According to a Monday statement from Egypt’s Ministry of Foreign Affairs, the conversation sought to affirm the mutual concern for coordination and exerting efforts for pushing forward a political compromise in Libya.

Shoukry expressed his appreciation for Bourita’s keenness to continue and intensify coordination with Egypt, and to keep Cairo updated on the latest developments related to Morocco’s efforts in this regard.

Shoukry also stressed the need for the political solution to fulfil the aspirations of the Libyan people and restore security and stability to the country, Hafez said. At the same time, the efforts would contribute to confronting terrorism, extremism and foreign interference.

“This is what was clearly reflected in the Cairo Declaration, and Egypt’s welcome to initiatives for truce,” Hafez added.

In June, Egypt’s President Abdel Fattah Al-Sisi announced the Cairo Declaration in the hopes that the initiative would instigate a ceasefire in Libya and achieve strong political solutions.

Shoukry and Bourita agreed to continue consultations and coordination, and to intensify their contacts with the active political circles in the Libyan arena, as well as international partners.

Meanwhile, Morocco is hosting a new round of negotiations between the main Libyan rivals, to discuss resuming the political path towards an agreement to end the bloody Libyan civil war.

The talks between delegations representing the High Council of State and the Libyan parliament in Tobruk started on Sunday and continued through Monday and Tuesday. They hope to achieve consensus on a ceasefire, as well as the methods for selecting high officials and unifying the Libyan territories.

These talks came after the Presidential Council of the internationally recognised Libyan Government of National Accord (GNA) and the House of Representatives in Tobruk announced a nationwide ceasefire on 21 August.