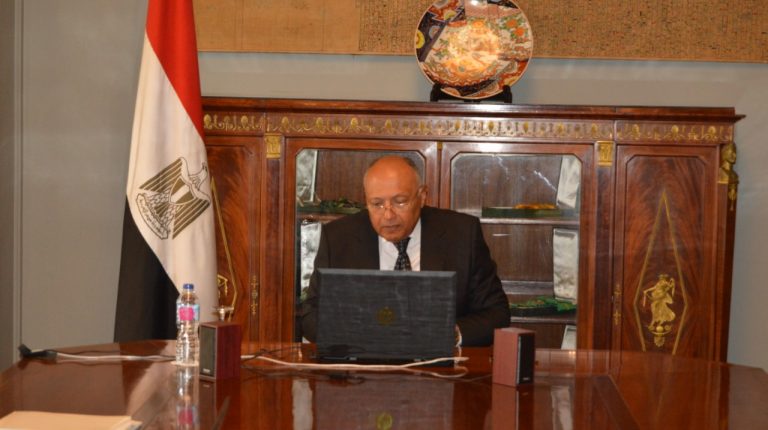 Egypt’s Minister of Foreign Affairs, Sameh Shoukry, has affirmed the need for a firm Arab policy towards “destructive” Turkish practices in the Middle East, according to a Foreign Ministry statement on Wednesday.

Shoukry’s remarks came during a speech on Wednesday before a committee, presided over by Egypt, on the Turkish interventions in Arab states. The committee meeting was held on the sidelines of the 154th regular session Arab League Council, which saw the participation of Foreign Ministers from the organisation’s member states.

The minister said that Turkish practices and interventions in many countries across the region represent the most serious emerging threats facing Arab national security.

During the meeting, Shoukry reviewed the “destructive practices of the Turkish ruling regime in a number of Arab countries, and in a way that causes social and sectarian divisions in the region”.

The minister also highlighted some evidence reflecting the extent of the Turkish regime’s interventions in some Arab countries. These interventions include facilitating the movement of tens of thousands of terrorists and mercenaries to Syria, transferring thousands of fighters to Libya, and threatening the resources of Iraq and Libya.

He further called for a firm stance to be taken and a unified policy to be put in place through more coordination between the Arab countries, to deter the Turkish regime.

The Arab League held its 154th regular session, on Wednesday, under the presidency of Palestine. The session was held to address many important issues of concern to the Arab region, with the Palestinian Cause the topmost concern on this agenda.

Further items on the agenda include social and health topics, including regional cooperation in confronting the novel coronavirus (COVID-19) pandemic. The meetings also discussed the regional strategy for responding to and preventing all forms of violence against refugees and the internally displaced, especially violence against women.