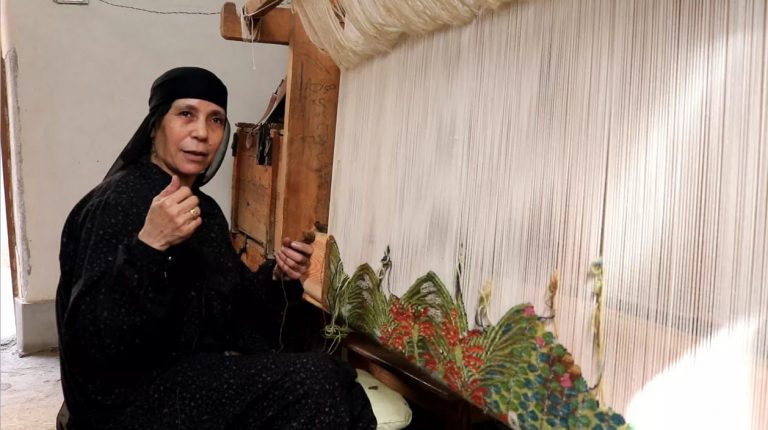 The year 1952 was not just one of political revolution, but also ground-breaking in Egypt’s carpet producing industry. 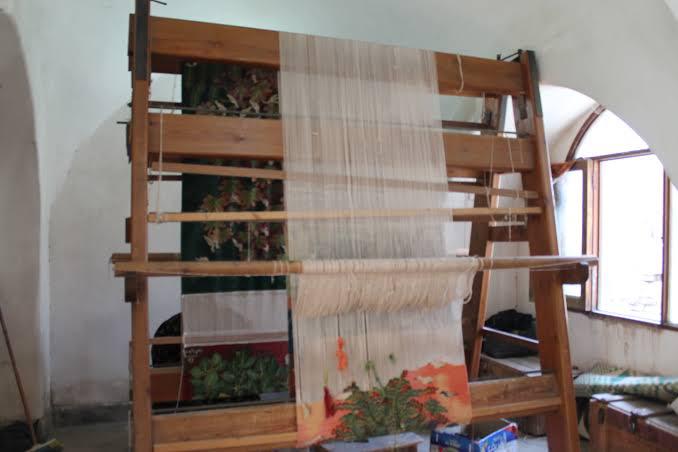 Wassef decided that the heroes of this centre would be the village youth, leaving it up to their imagination to create wonders using colourful threads and looms.

He divided them into groups between the ages of 8 and 12, and enrolled them in the small village’s carpet arts centre. Each rug produced there is unique, telling a story, with some even produced to document real life events and concepts.

There are no designs, drawings, or diagrams that are created beforehand of what forms the artwork would take. In fact, it is all up to the imagination of the weavers, who go entirely freehand.

Work to finish one rug may take up to a whole year, as a weaver cannot spin more than 90 cm per month.

All the colours used to dye the thread and yarn used in the carpets are sourced from nature, with recipes dating back to as long ago as the 4th and 5th centuries. Wassef decided to cultivate the plants needed to maintain the sources needed for these natural dyes on site too, ensuring one of the most traditional methods possible for creating artisanal carpets and creating an exotic yet rustic look.

The cotton used in the carpet production is also locally produced Egyptian cotton, with the wool used in other products produced and spun from local sheep. 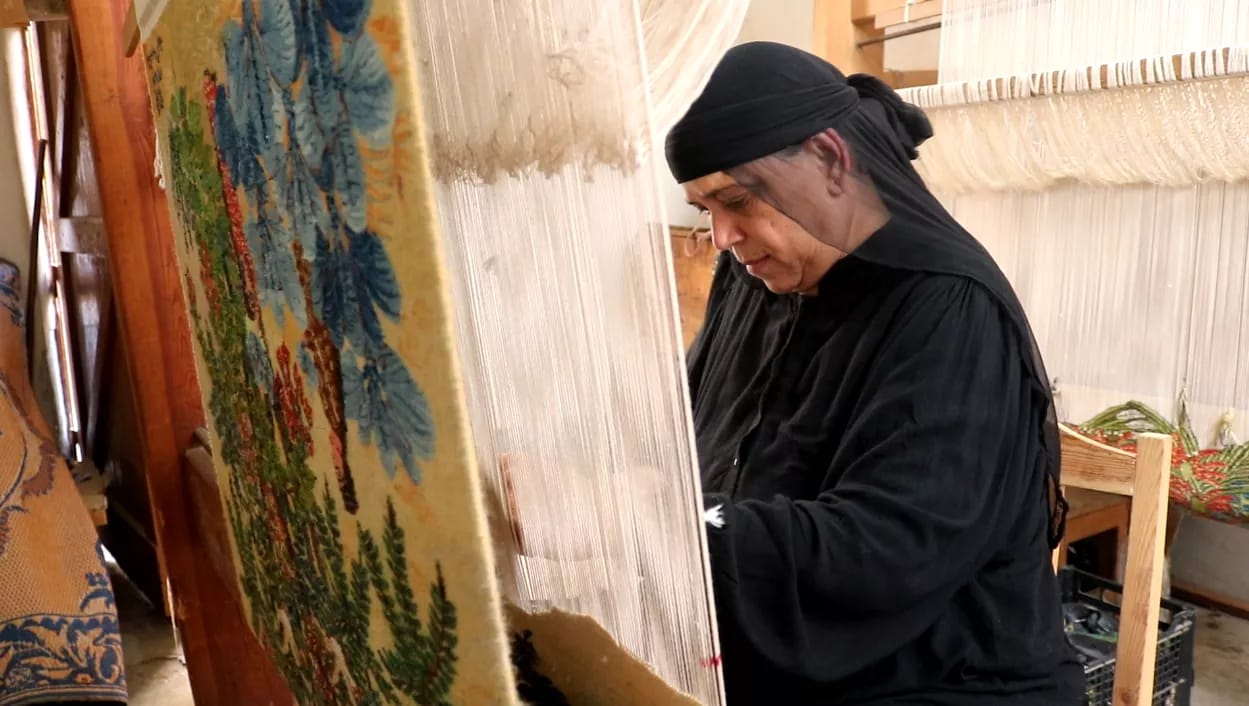 Although Wassef passed away, his daughter Suzanne took over the project with her husband. Wassef’s handmade carpets are located in museums around the world, with the centre itself also acting as an attraction for tourists and fans of this type of art from around the world.

One of the centre’s workers, Soraya Hassan, 58, said, “Once you come here and sit in front of your loom, you feel at ease. I live here more than my home, and when I get home, it is bedtime and I look forward to waking up in the morning to come here again. I first came here in 1975 when I was only nine years old. There was a generation at that time older than us, and from whom we learned this kind of art.”

Soraya recalls the founder, saying, “We used to call Ramses as Al-Bayh. When he came, we were overjoyed, so we ran over to him. After his death, Suzanne, his daughter assumed the task [of running the centre], and they asked for a second generation, and I was one of the first of this [second] generation.”

Regarding the method of work, Soraya explains, “Here we do not transfer drawings from paper or from an image, but we see nature, we imagine it and then transform it into drawings by textures.” 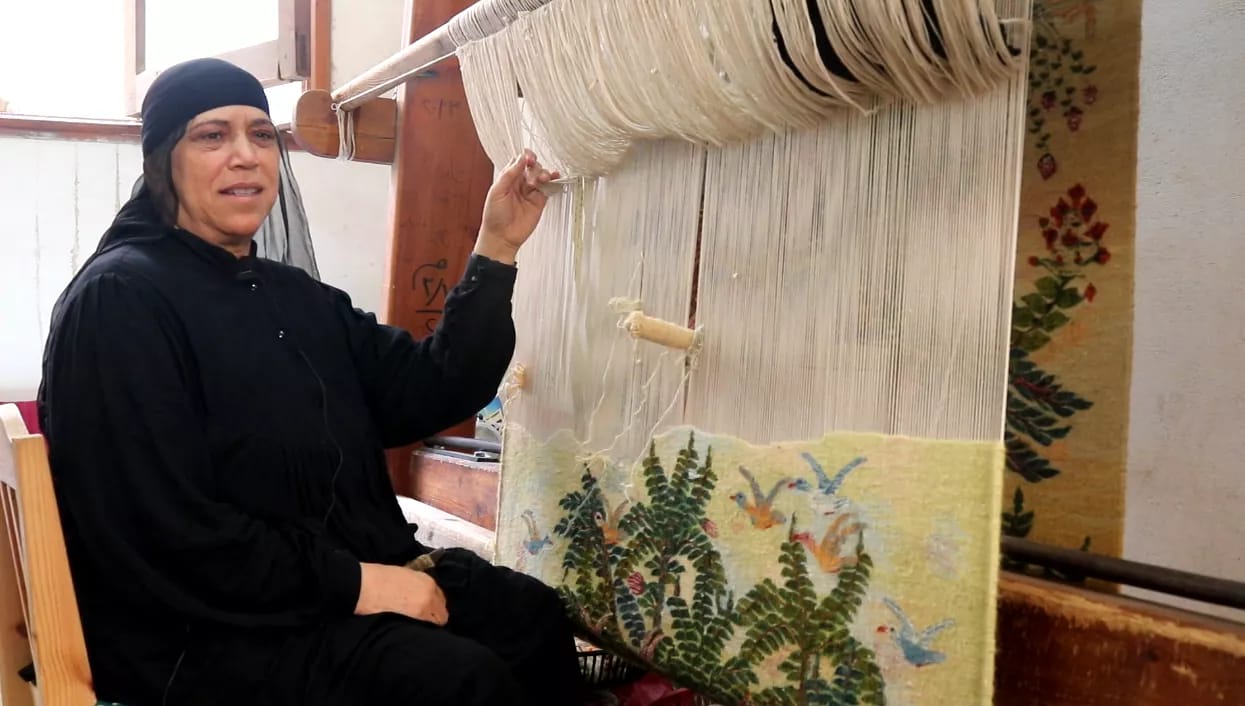 Soraya noted that each carpet can tell a story, whether imagined or real. It can even tell a story about the act of making carpets. She noted that the last project she created was a documentation of the journey of dyeing the threads we use in carpet weaving.

On the adjacent loom, another weaver called Nadia, 56, picks up on the story and adds, “The wool here comes to us white, and we dye it in natural colours, not industrial.”

She said that the weavers create the colours, then arrange them, and start weaving the rug that can take anywhere from six to eight months.

“We do not work on schedule; they leave us here to imagine and create without the pressure of time,” Nadia said. “For us, this art is a talent and a source of income that we cannot dispense. It is now running in our blood because we learned it when we were young.”

Nadia describes her relationship with work as one of indescribable joy, particularly when she finishes a carpet. “We take pictures with the rug, and each one of us is filled with joy as soon as it is finished, or one of my companions has also finished,” she said, “When the rug maker sees it in its final form, it feels like seeing it for the first time, as during the work, we only see the strings.”

On the impression of their families about their work and their love for it, Soraya says “Our children are happy with the work we have, and they are proud of us everywhere. This is not a job but an artform, and we never believed that all this creativity was inside us. Al-Bayh Wissa Wassef, may God have mercy on him, is the reason behind everything we are in.”

Nadia ends by saying, “Now we are international. I met Princess Diana and she opened the exhibition for us!”