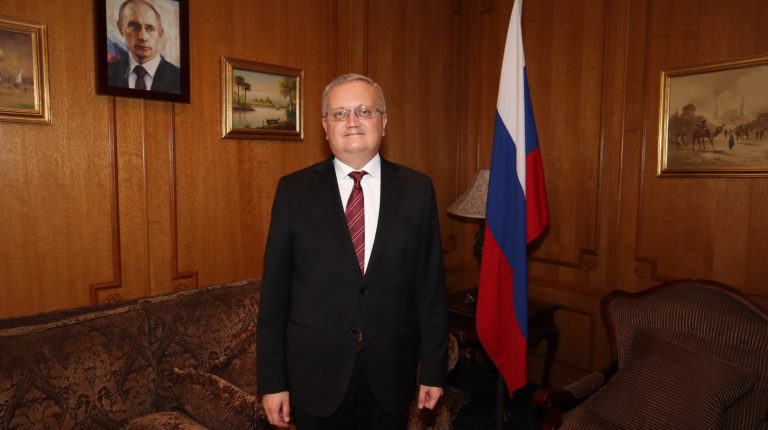 Russia is looking forward to resuming its ties with Africa, as the country has become stronger in many fields, including militarily and economically, Russia’s Ambassador to Egypt, Georgiy Borisenko, has told Daily News Egypt.

“Russia is trying to return to Africa, as during Soviet times, we had strong ties with many countries across the continent, but after the dissolution of the Soviet Union, we had a difficult time internally, and it was difficult for us to keep all these communications open,” Borisenko said. “Egypt is traditionally our window to Africa, as it was 50 or 60 years ago, and so it is now.”

Borisenko noted that Egypt is Russia’s main commercial trade partner in Africa, accounting for about a third of the latter’s trade with the continent. During 2019, the two countries enjoyed a total bilateral trade volume of $6.2bn.

“Unfortunately, due to the novel coronavirus (COVID-19) pandemic, the trade exchange between Egypt and Russia has suffered a significant downturn, and stood at only $1bn in the first quarter (Q1) of 2020,” he noted.

Egypt and Russia have cooperated on many projects in recent years, as Moscow is aiming to ensure it benefits from an African expansion of the Russian Industrial Zone in Egypt’s Suez Canal area.

“The Russian Industrial Zone in the Suez Canal can help us to export goods produced there to the many African countries that are part of the same free trade zone with Egypt,” Borisenko said, “This will be very important and positive for us because the goods are produced in Egypt but by Russian technologies.”

Russia is also trying to make connections with Africa, and participate in different economic projects across the continent, the ambassador said.

“This participation is to help our African friends to settle some of their political disputes,” Borisenko said, “We believe that Africa is very important in the region, and it is clear that the future will belong to the continent.”

Before the collapse of the Soviet Union, Russia played a pivotal and influential role in Africa, a role it is aiming to revive. In October 2019, Moscow held the first-ever Russia-Africa Summit in Sochi, which President Vladimir Putin co-chaired with Egyptian President Abdel Fattah Al-Sisi. During the economic summit, Putin said that the trade exchange between Moscow and Africa had more than doubled in the past five years to over $20bn.

Egypt offers its expertise in fighting against COVID-19