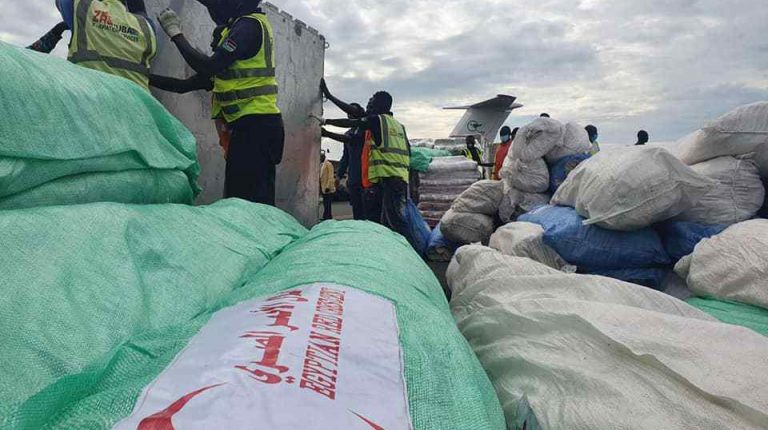 Egypt has sent 197 tonnes of humanitarian aid, including foodstuff, to those affected by recent extensive flooding in Sudan and South Sudan, according to Egyptian Minister of Social Solidarity, Nevine El-Kabbaj.

On Sunday, a number of Egyptian civil society organisations sent a shipment of humanitarian and relief aid to the two countries, to assist those affected by the floods. The shipment comes under the auspices of Egypt’s Ministry of Social Solidarity and the Egyptian Red Crescent.

El-Kabbaj said that Egypt always stands with its brothers during times of crisis, whilst asserting that the ministry, in conjunction with its civil society partners, has provided the 197 tonnes of relief aid to the country’s two southern neighbours.

The minister hailed the civil society institutions for the support they provide during crises, both in Egypt, as well as across the Arab world and Africa.

Executive Director of the Egyptian Red Crescent, Ramy Al-Nazer, said that an international relief team from his organisation has been in southern Sudan since the beginning of the large-scale floods. They have been working to provide relief aid in cooperation with Sudan’s Red Crescent and South Sudan’s Red Cross.

Al-Nazer added that another relief team travelled to Sudan with the aid shipment prepared by the Egyptian Red Crescent, to provide urgent relief to those affected by the crisis.