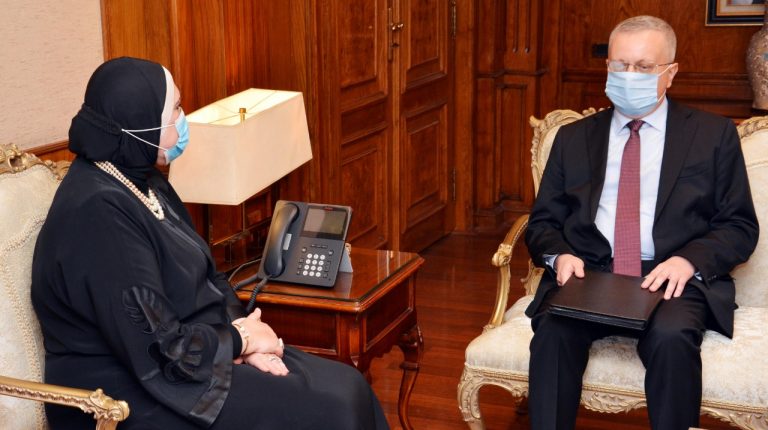 Preparations are underway for the 13th round of the Egyptian-Russian Joint Committee for Trade, Economic, Scientific, and Technical Cooperation, according to Egypt’s Minister of Trade and Industry Nevine Gamea.

During a meeting with Russia’s Ambassador to Egypt Georgiy Borisenko, on Sunday, Gamea pointed out that Russia is one of Egypt’s most important economic partners at the global level, especially in industry.

The meeting tackled the latest developments in the establishment of the Russian Industrial Zone in Egypt. The zone ensures Egypt as a focal point for Russian products to various global markets, especially the Middle East and Africa, the minister disclosed.

She noted that 32 Russian companies have announced their desire to establish projects in the Russian Industrial Zone, in which operations are due to commence early next year. It is anticipated that actual participation will start in 2022

Gamea pointed out that the discussions also dealt with Russia’s desire to promote joint cooperation with Egypt in confronting the novel coronavirus (COVID-19) by using the Russian vaccine to treat infected cases. Russia is also studying the possibility of producing the vaccine against the virus in Egypt, in cooperation with local pharmaceutical companies.

She added that the resumption of direct air traffic between Cairo and Moscow will contribute to the return of all economic activities between the two countries. At the same time, it is likely to  contribute to a strengthening of the economic cooperation system.

Ambassador Borisenko expressed his country’s keenness to enhance cooperation with Egypt in various fields, especially in the economic field. He stressed the importance of activating joint work and resuming industrial cooperation, which began more than 50 years ago.

He revealed that a high-level Russian delegation is about to visit Cairo, to review the project establishing a Russian industrial zone in Egypt, which will be located in the Suez Canal Economic Zone (SCZone). The visit will come in preparation for the beginning of operations in the near future.

Egypt is our window to Africa: Russian Ambassador