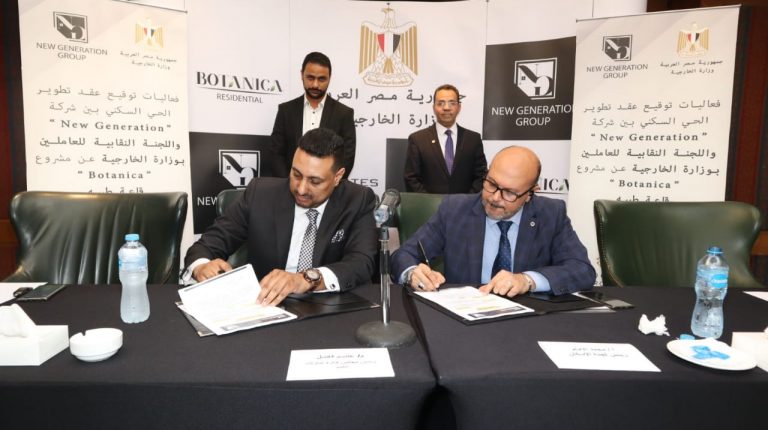 A trilateral strategic partnership agreement has been signed to develop the Botanica project, an integrated urban housing project in East Cairo’s New Administrative Capital (NAC), with investments worth EGP1.3bn

The partnership was signed by Cairo Capital Developments, Emarat Masr group, and the Egyptian Ministry of Foreign Affairs’ Workers Committee.

Cairo Capital Developments CEO Ahmed Selim said that the project is located in the R7 area at the NAC, next to the national project’s embassies district. Botanica will include 966 apartments of varying sizes, ranging from 100 sqm to 250 sqm, in addition to a commercial mall on an area of ​​30,000 sqm.

Selim noted that under the agreement, Cairo Capital and Emarat Masr group will develop the Trade Union Committee-owned project for the Ministry of Foreign Affairs, in exchange for a percentage.

He added that the two companies will complete and deliver the project within four years. He also elaborated that the New Generation Group was launched as a partnership between Cairo Capital and Emarat Masr group to develop the project. Assem Fadel was assigned to the company’s Chairperson position, and Ahmed Selim as the CEO.

Selim explained that the project will be launched over four sales phases. With an expected boom in sales at NAC projects and the Egyptian government’s move to the new location in 2021, Botanica is expected to sell out within a short period.

Sales are also projected to see an uptick as markets rebound following the slowdown caused by the novel coronavirus (COVID-19) pandemic.

New Generation Group Chairperson Assem Fadel said the project will be developed over four years and construction works will begin immediately after the project obtains ministerial approval, which is expected within two months.

Fadel added that the project’s design is currently underway, with plans to direct EGP 100m into construction works in the first year. The project will be financed by shareholders in addition to sale proceeds.