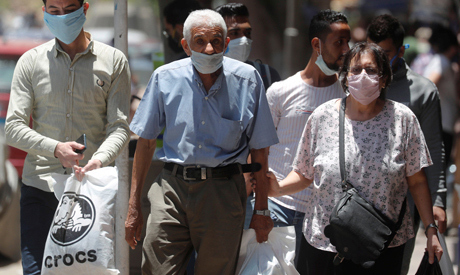 A Central Agency for Public Mobilization and Statistics (CAPMAS) study, published on Monday, revealed that Egypt’s infection rate of the novel coronavirus (COVID-19) is about 967 cases per million.

The study, which looked at the impacts of the coronavirus on Egypt compared to other countries, added that Egypt recorded a total of 5,184 deaths, including 19 deaths among foreigners.

Egypt has reported a total of 96,753 confirmed cases of the coronavirus, which includes 172 foreigners, in the period between its first appearance in the country until 18 August, the CAPMAS study said.

The study reported that the number of cases increased daily for an extended period, with 19 June witnessing the highest daily tally of confirmed cases, with 1,773 being recorded, and 66 deaths.

Meanwhile there have been a higher total number of COVID-19-related deaths among men, at 2,911, compared to the 2,254 reported among women, the study explained.

The highest growth rate of infections was recorded in the governorates of Daqahleya, Damietta, Giza, Alexandria and Minya in the second week of the pandemic. Egypt’s border governorates recorded the lowest infection rates, with the first cases of confirmed infections reported there between two and eight weeks after elsewhere in Egypt, according to the CAPMAS study.

The virus presented more dangerous symptoms and side-effects among some age groups to others, with people over 66 the most endangered. This age group reported 48.9% of the total deaths from the coronavirus in Egypt, followed by people in the 46-65 years age group recording about 41% of deaths.

On 4 March, the government put in place a series of precautionary measures to combat the spread of the virus. This is widely considered to have contributed to a significant decrease in Egypt’s infection rates, and flattened the curve of daily infections and deaths for as long as possible, CAPMAS asserted.

Egypt ranks 26th globally in terms of the number of people infected with the virus, with the country reporting 96,581 infections compared to the 5.6 million reported in the US.

However, Egypt has the second highest infection rate within Africa, behind South Africa which has 592,000 confirmed cases.

Compared to other Arab countries, Egypt has the fourth highest infection rate, after Saudi Arabia, Iraq, and Qatar. It has the second highest death rate in the Middle East region, behind Iraq which recorded 6,036 COVID-19-related deaths.