In the time of the novel coronavirus (COVID-19), face masks have become a necessary and mandatory aspect of our daily lives, whether we are out in public spaces, at work, or using transportation.

Ostensibly, we are obliged to wear face masks to limit the spread of the virus. But now, one woman in Egypt is using them to fight against gender-based violence. 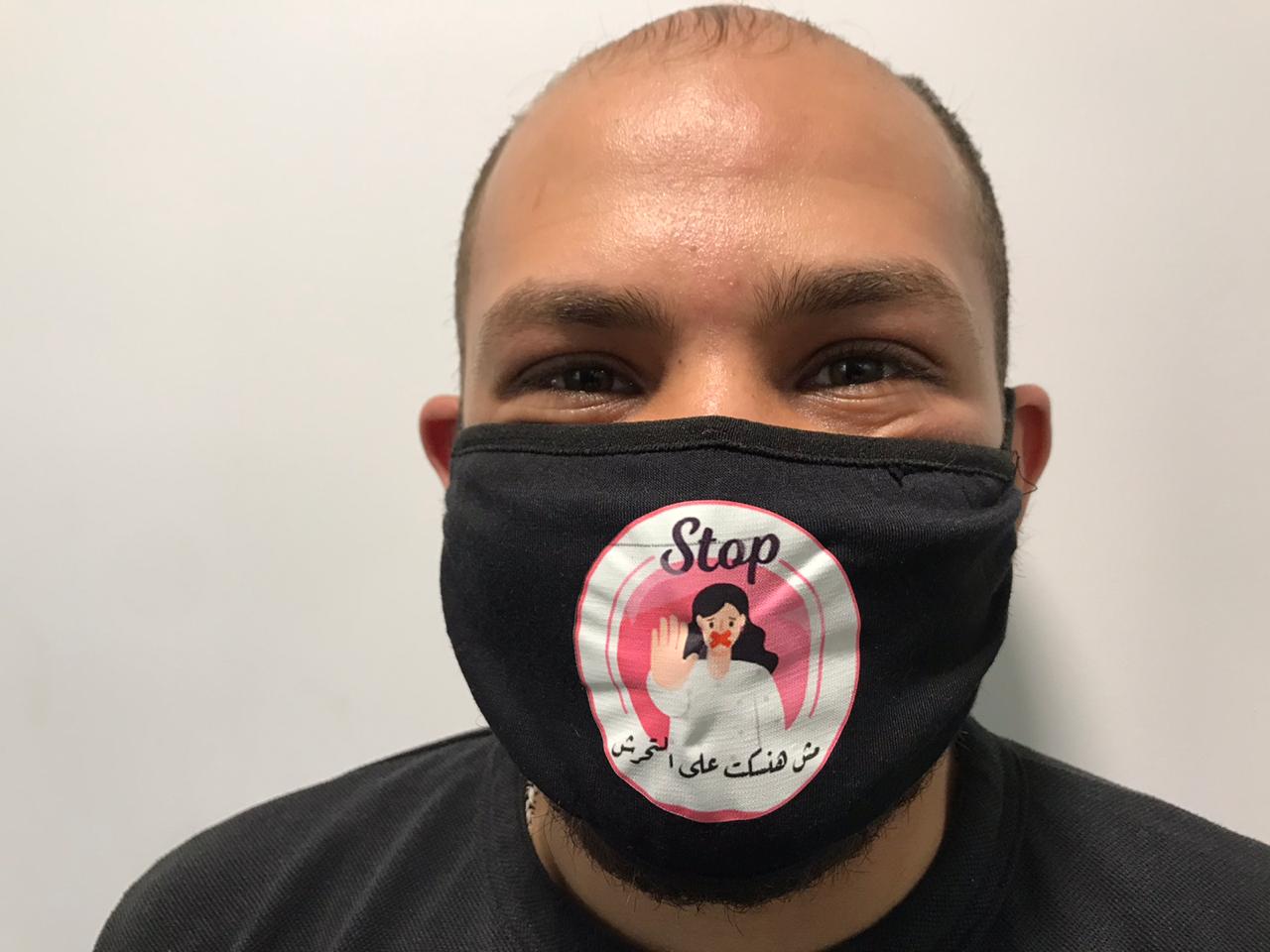 Abdel Fattah has become well known for her activism work in human and women’s rights, and has been active in developing new several initiatives to defend women’s rights and to give them a wider public space.

She has always been an advocate for combating sexual harassment and for preserving women’s rights to live in freedom and peace. She has developed many workshops and training courses for young men and women in Egypt, to provide an education on the need for each party to respect freedoms, opinions, and needs of the other.

Abdel Fattah is also the founder of many awareness initiatives, including “Msh Hanaskot Aan el Taharosh” (We will not be silent about sexual harassment), “Set b 100 set” (Woman equals 100 women), and “Fostan Zaman” (Historic Dress).

In the recent period, with the coronavirus pandemic in full force, she has kept up her hard work through the launch of two new initiatives. Entitled Bab El Saada (Door of Happiness) and Kemama Naswya, the initiatives are designed to support women’s issues under COVID-19.

Through her latest initiative, Kemama Naswya, Abdel Fattah makes face masks printed with slogans, pictures, and sentences that are used to raise awareness on women’s rights.

Daily News Egypt sat down with Abdel Fattah to learn more about the initiative and how it was originated.

“The rate of violence against women increased during the coronavirus period, so I thought about designing masks with printed phrases aimed at preventing gender-based violence,” Abdel Fattah said. “It was also to encourage women to protect their rights, and as a means of spreading awareness among people about the need to respect women and their rights.”

She added that the idea of ​​the masks came after the government’s decision to stop all activities that require gatherings, which put a stop to the workshops and cultural cinematographic shows that she used to participate in. 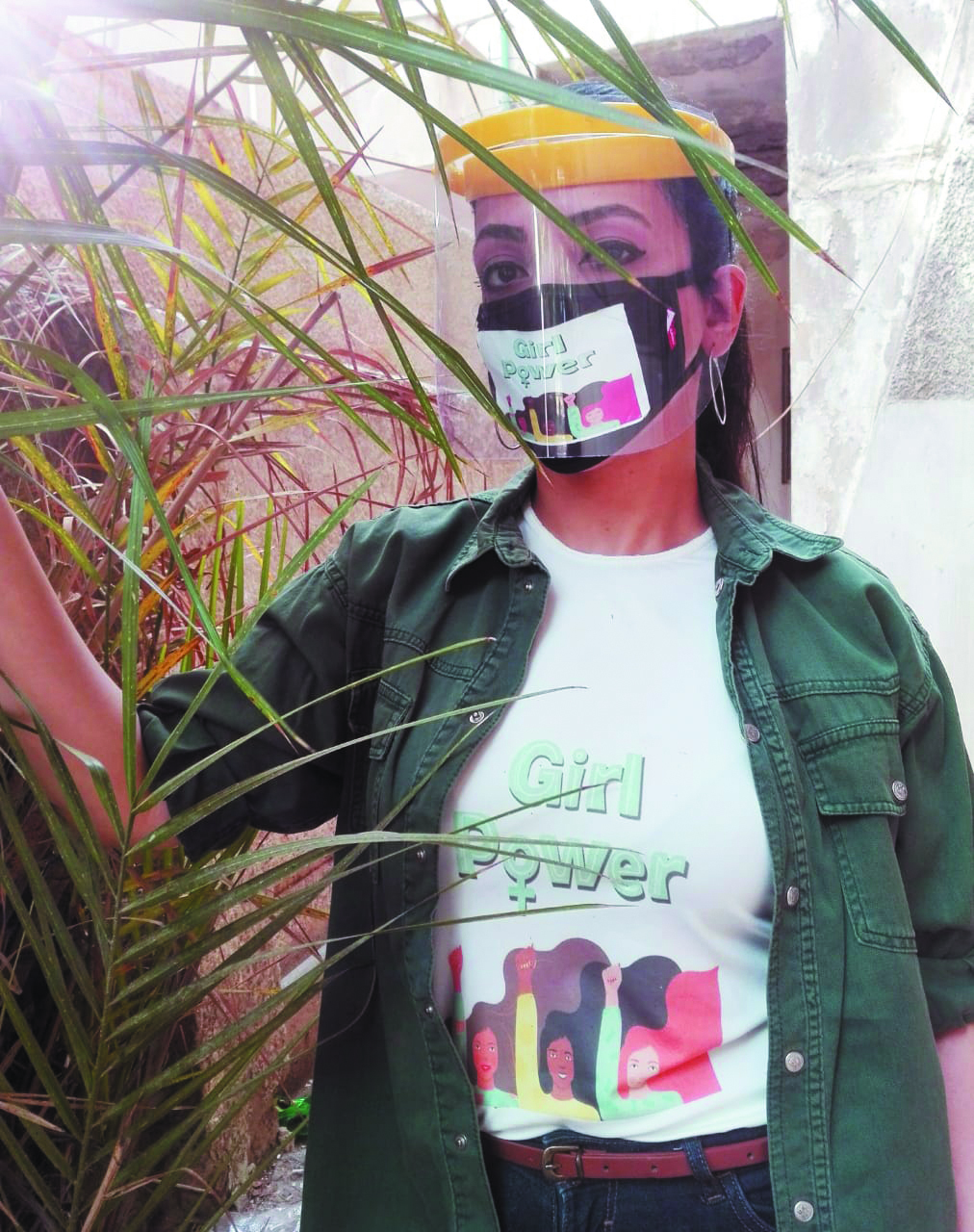 Abdel Fattah explained that her participation in these workshops were to create a debate among young men and women about a specific issue, and to educate girls about their rights. These gatherings were also specifically designed to introduce young people to the concepts of women’s rights, and training the workshops’ participants to accept these rights.

“I began wearing the masks printed with feminist slogans which caught the attention of passers-by who asked about the slogans,” she elaborated. “From there, I became more aware of the face masks’ ability to raise awareness on the need to stop violence against women, and that I was able to spread awareness among passers-by.”

Abdel Fattah has also ensured that these “feminist” masks meet the health and safety standards outlined by the World Health Organization (WHO). She noted that at first she had to make the masks herself, but in order to meet the safety standards, she decided to only print on the ready-made masks.

“At the beginning, I used to print ready-made designs from Google, then a graphic designer joined my team to help me create new designs, and I am currently trying to learn graphic design by taking courses,” Abdel Fattah said.

Abdel Fattah noticed the state of despair and frustration many people have been feeling since the start of the coronavirus pandemic. She thought about launching an initiative called “Gate of Happiness”, which aims to spread happiness among people, by making masks with well-known cartoon and comic characters featured on them, including Mickey Mouse and Batman.

In an initiative launched on social media, she encourages the participants to watch a live singing event, which was broadcast on the initiative’s official page every Thursday evening. She also called on followers to participate in the initiative by posting videos calling for joy and happiness.

Abdel Fattah said she is currently working on two new campaigns, the first of which aims to raise awareness on ending animal cruelty, while the second one aims to end racism.

She also plans, in the coming period, to launch a platform that defines types of harassment. This will help users learn how to tell the difference between flirting and harassment.