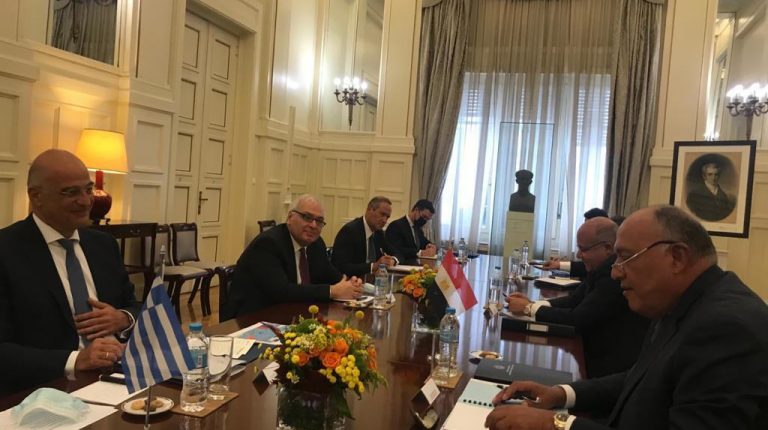 Egypt’s Minister of Foreign Affairs Sameh Shoukry met with his Greek counterpart Nikos Dendias in the Greek capital, Athens, on Tuesday, for discussions on regional and international issues.

During the meeting, the two sides also discussed bilateral relations.

In a press conference following his meeting with Dendias, Shoukry said that his visit to Greece reflects the importance Egypt gives to its ties with the southern European country, that extend back thousands of years.

He added that the importance Egypt gives to these ties reflects its sincere desire to continue working in the interests of the peoples of both countries. The minister also stressed Egypt’s desire to continue cooperation with both Greece and Cyprus.

Talks between both Shoukry and Dendias addressed bilateral cooperation based on mutual interest and respect, as well as a reliance on international legitimacy and principles of international relations.

Shoukry also underlined that the maritime border demarcation agreement reached between the two countries is a further reflection of the strong ties between Cairo and Athens.

He pointed out that the articles of the agreement abide with international and maritime laws, which prove that the two countries adhere to these rules governing international relations.

The minister also expressed Egypt’s appreciation for the bilateral cooperation with Greece, which has increased the level of cooperation, whether at the political, economic or cultural levels. Shoukry noted that the regional situation, including the tension in the Eastern Mediterranean region, was touched upon during the meeting.

Both he and Dendias agreed to continue work on these areas through bilateral cooperation and contacts with important international parties. These efforts would reject “provocative” actions that destabilise and fuel the situation.

He also stressed the need to work together in order to ensure prosperity and cooperation across the Eastern Mediterranean, as well as create the support for regional and international stability.

Shoukry highlighted the need to reach peaceful solutions to all outstanding issues in the Eastern Mediterranean region which affect the stability of both Egypt and Greece. These include the situations in Libya and Syria, the Palestinian Cause, and developments related to the Israeli agreements with the UAE and Bahrain.

Shoukry expressed his hope that the agreement will open the way for more stability in the region, as well as the adoption of the legitimate rights to an independent statehood of the Palestinian people.

Discussions also touched on the developments related to establishing the EastMed Gas Forum, to achieve the optimum benefit from the energy resources in the Eastern Mediterranean region.

Shoukry’s visit to Athens comes amid tensions in the region between Turkey on the one side, and Greece and Cyprus on the other. Tensions are concentrated on maritime borders and rights for digging for oil in a region which both Ankara and Cyprus claim sovereignty on.