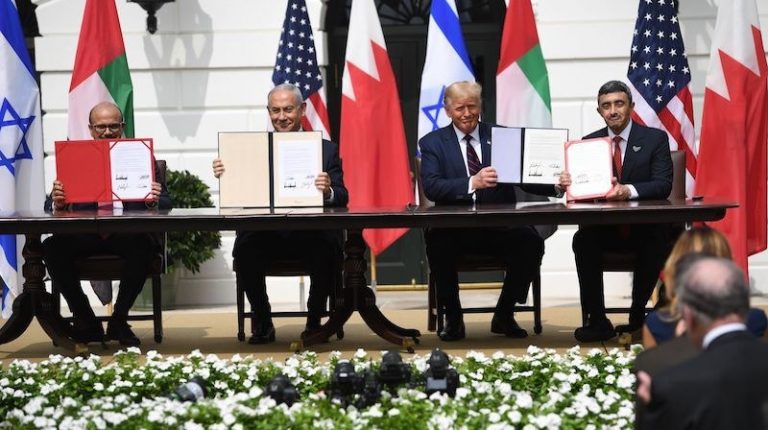 The United Arab Emirates, Bahrain and Israel singed a pair of historic agreements formalizing diplomatic relations between them at the White House on Tuesday.

Israeli Prime Minister Benjamin Netanyahu and the foreign ministers of the United Arab Emirates and Bahrain signed the accords, marking a prominent geopolitical change in the Middle East.

“We’re here this afternoon to change the course of history,” US President Donald Trump said, adding that “together these agreements will serve as the foundation for a comprehensive peace across the entire region.”

UAE’s Foreign Minister Sheikh Abdullah bin Zayed expressed a similar sentiment, stressing that “we are witnessing today a new trend that will create a new path for the Middle East.” He added that Abraham Accords “will enable us to stand with the Palestinians and enable their hopes of establishing a Palestinian state.”

The text of the agreements has not been made public, however, they are expected to normalize full relations between the countries.

Earlier on Tuesday, Trump said he would have “no problem” selling the advanced F-35 fighter jet to the United Arab Emirates, despite objections from Israeli Prime Minister Benjamin Netanyahu.

“I would have no problem in selling them the F-35, I would have absolutely no problem,” Trump told Fox News in an interview ahead of a signing ceremony.

US Secretary of State Mike Pompeo said Tuesday’s breakthrough marks the start of a broader shift in the Middle East.