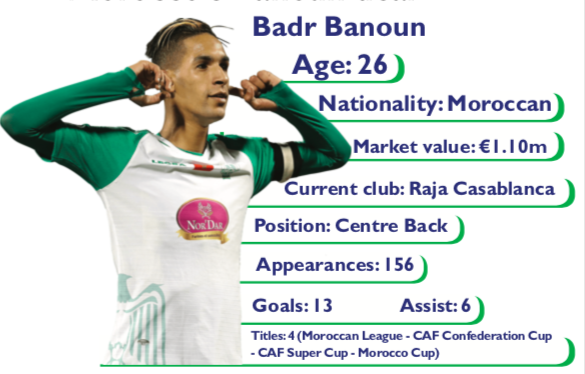 Reports have appeared in both the Moroccan and Egyptian press stating that Al Ahly had completed its agreement with its Moroccan counterpart to take on the 26-year-old player, whose contract with Raja extends until 2022.

Al Ahly’s Swiss coach Rene Weiller had called for a strengthening of the club’s defensive line during the current transfer market.

Moroccan reports indicated that the Raja captain’s transfer to Al-Ahly will be the largest in history for a Moroccan defender. Sources in the country also said that the deal will cost the Egyptian club about $2m, excluding some variables, in addition to the annual salary that the player is set to take over the next three seasons.

Morocco’s Radio Mars said that Al Ahly had succeeded in completing a deal involving Banoun from Raja, with a three-year contract, in the most expensive transfer deal for a Moroccan defender.

Another Moroccan newspaper indicated that Al Ahly and Raja Casablanca had agreed on all the financial details of the deal. Once completed, it would become one of the most prominent transfers between the Moroccan and Egyptian leagues.

The newspaper added that the negotiations between the two parties began some time ago, and in complete secrecy, with the deal’s announcement awaiting announcement.

Banoun was considered one of the most prominent players that the Moroccan leagues have produced in recent years. The defender has led Raja Casablanca to more than one title, and he has also carried the captaincy of the Moroccan national team in the latest edition of the African Nations competition.

Banoun has participated in 19 matches with Raja this season, including seven in the African Champions League, during which he scored three goals.

Al Ahly will need to dispense one of their foreign players if they want to include any new player. The Egyptian club is seeking to sell Moroccan Walid Azzaro and Angolan Geraldo, initially, before evaluating the rest of the team during the remainder of the season.

It is worth noting that the Egyptian Premier League has many brilliant Moroccan professionals, including Zamalek’s duo Mohamed Onagem and Ashraf Bencharki.