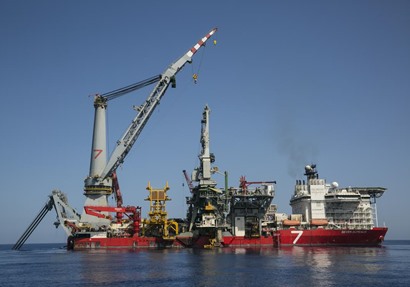 Italian oil and gas company Eni and BP Egypt announced, on Wednesday, that a new natural gas field has been discovered at the Nidoco NW-1 exploratory well, located in the Abu Madi West concession in the conventional waters of the Nile Delta, offshore Egypt.

The Nidoco NW-1 exploratory well is located 4 km north from the Nooros field, which was discovered in July 2015, 5km from the Egyptian coast, in the great Noroos area. The discovery is at a water depth of 16 meters and lies on a new formation-level that had not previously been encountered in the existing Noroos field.

The announcement added that the discovery has added significantly to the gas potential of the great Noroos area.

Eni, together with its partner bp, in coordination with the Egyptian Petroleum Sector, will begin screening the development options of this discovery benefitting of the synergies with the area’s existing infrastructures.

BP holds 25% of the contractor’s share in the Nile Delta concession, while the Italian company Eni, through its subsidiary IEOC, holds 75%. The field is operated by Petrobel, a joint venture between IEOC and its local state partner, the Egyptian General Petroleum Corporation (EGPC).

BP Regional President for North Africa Karim Alaa said, “We are pleased to deliver, together with our partners, more gas reserves and production into the Egyptian national grid.”

The latest discovery emphasises the existing resources base and future potential of the Great Noroos area and underpins BP’s commitment to Egypt, Alaa added.