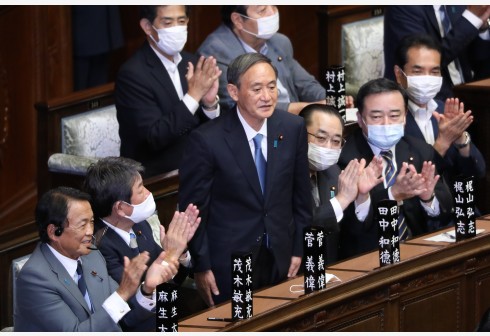 Yoshihide Suga, the new leader of the ruling Liberal Democratic Party, was chosen as Japan’s new prime minister to succeed Shinzo Abe in an extraordinary parliamentary session on Wednesday.

The parliament formally chose Suga as the nation’s 99th prime minister at the extraordinary session convened in the afternoon.

Suga was elected by both chambers of Japan’s bicameral parliament, winning 314 votes in the more powerful 465-member lower house and 142 votes in the 245-member upper chamber.

Outgoing prime minister Abe’s cabinet resigned en masse ahead of Suga being selected as the nation’s next leader.
The new prime minister has formed his cabinet comprising of a number of ministers who served under Abe.

His new lineup sees health minister Katsunobu Kato picked as Chief Cabinet Secretary, a key post that functions as both a policy coordinator and the government’s top spokesman.

Abe’s younger adoptive brother and a former senior vice foreign minister, Nobuo Kishi, was given his first Cabinet portfolio as defense minister, taking over from Taro Kono who was picked to serve as minister in charge of administrative reform.

LDP bigwigs that also served under Abe were retained in Suga’s cabinet, in interests of the party’s continuity, with these including Finance Minister Taro Aso, Foreign Minister Toshimitsu Motegi and Environment Minister Shinjiro Koizumi.

Fifteen of Suga’s picks for his 20-member Cabinet held ministerial portfolios in the previous administration.

Justice Minister Yoko Kamikawa and Olympics and Paralympics Minister Seiko Hashimoto are the only female ministers Suga tapped for his cabinet, despite the government’s previous push to promote more females to positions of power in businesses and politics.

“I want to create a government that people can trust. I will push ahead with deregulation and put an end to ministry sectionalism, endemic vested interests and the practice of blindly following past precedents. I will create a working cabinet,” he added.

After formally launching his cabinet, Suga will be formally inaugurated later at a ceremony at the Imperial Palace.