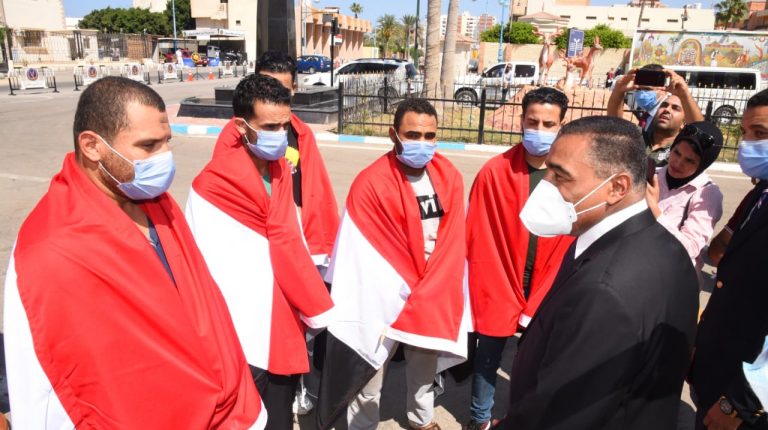 The six Egyptian workers recently abducted by human traffickers in Libya were freed and returned home through Salloum border crossing on Thursday. Egypt’s General Intelligence Service (GIS) freed the Egyptian nationals who were abducted in Bani Walid in southwestern Libya and repatriated them in cooperation with the Libyan security authorities.

Shoaib stressed that the Egyptian state will protect its citizens, either at home or abroad. The governor thanked the Libyan authorities and the Bani Walid Security Directorate for their cooperation with the Egyptian security agencies and the services that participated in their return.

Shoaib emphasised that Egypt is currently implementing various projects that can employ the workers, with reasonable wages.
The governor presented EGP 5,000 and a medal for each of the returnees, as a symbolic gift for their safe return. He said that the governorate is now preparing means of transportation to return them to their home governorates and their families.

Since the fall of Muammar Qaddafi in 2011, Libya has undergone years of conflict. The North African nation has been split between opposing governments since 2014; the Government of National Accord in the west, and the House of Representative in the east, supported by Libyan Arab Armed Forces.