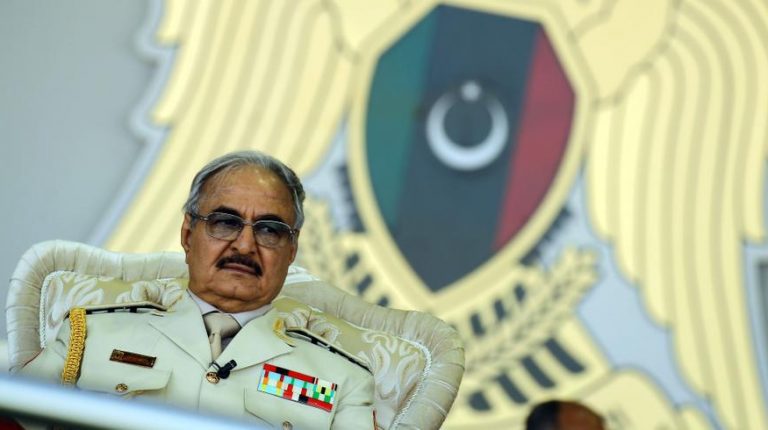 Commander Khalifa Haftar, head of the Eastern-based Libyan Arab Armed Forces (LAAF), has announced his agreement to the conditional resumption of oil production and exports in Libya, following an eight-month blockade.

In a televised speech on Friday, Haftar said the resumption of oil production will occur under certain conditions that ensure fair distribution of energy revenues, and prevent using oil revenues to support or fund terrorism.

Haftar added that the LAAF “will not hesitate to make concessions as long as they are in the interest of Libyans”, and prevent the exacerbation of economic conditions in the war-torn country.

He also said that all previous initiatives aimed at resolving the crisis failed because they focused on power sharing, with little concern for the difficult living conditions under which most Libyan citizens suffer.

The Government of National Accord’s (GNA) Deputy Prime Minister in Tripoli, Ahmed Maiteeg, issued a statement saying that oil exports and production at all oil fields would resume. A joint technical committee will also be created to supervise the country’s rich oil revenues and ensure a fair distribution.

Al-Mesmari added that dialogue with representatives from the Libyan tribes has been initiated with Maiteeg’s participation, and that they have reached an agreement on reopening Libya’s oil fields.

However, Libya National Oil Corporation (NOC) Chairperson Mustafa Sanallah rejected any attempts that “politicise the oil sector”. He said, on Friday, that “lifting the force majeure restrictions that have halted oil exports from the war-torn country depends on the demilitarisation of all oil establishments”.

Friday’s move came after nationwide protests erupted against the deteriorating living conditions and corruption. The protests, which took place in the cities of Benghazi, Al-Marj, Al Bayda, Sabha, and Zliten, led to the resignation of the eastern-based government, headed by Abdullah Al-Thani. The resignations follow GNA head, Fayez Al-Sarraj, expressing his desire, on Wednesday, to resign by the end of October.

Similar demonstrations also erupted in August in several cities of western Libya, including Tripoli and Misrata, also against deteriorated living conditions and corruption.