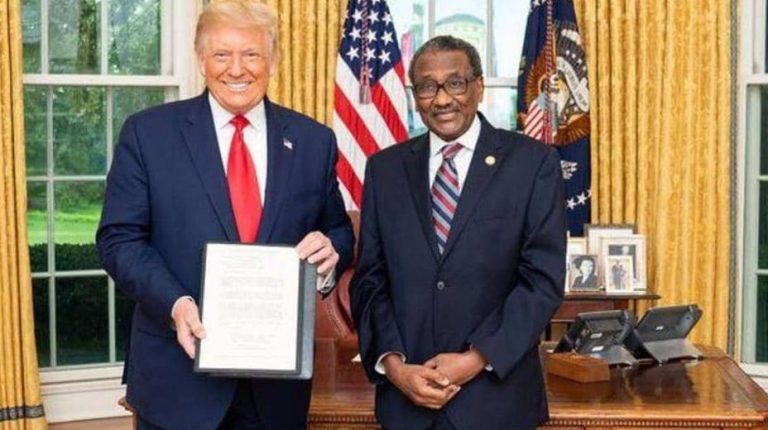 After Ambassador Sati presented his credentials to US President Donald Trump, the first Sudanese ambassador to do so in 23 years, the State Department expressed its aspirations for progress in relations between the two countries.

US Assistant Secretary of State for African Affairs, Ambassador Tibor Nagy, said that he is looking forward to progress in relations between the US and Sudan.

In a post on his official Twitter account, Nagy added that he is looking forward to progress in relations between the two countries, and congratulated Ambassador Sati for taking up the ambassadorial role.

In an interview with Sky News Arabia, Sati said that his country is seeking “normal relations with its regional surroundings and to restore its relations with the countries of the world”.

He noted that there is close cooperation with Washington to remove Sudan from the list of countries that support terrorism.

“There is a big shift in the US policy towards Sudan, just as there are great efforts and close cooperation with Washington to remove Sudan from the list [of countries that support] terrorism,” Sati added. “We are working to return Sudan to the international community.”

He also said that his country is working to “remove the obstacles” that prevent Sudan’s removal from the list.

For nearly a quarter of a century, the US and Sudan have appointed only Chargé d’Affaires to run their respective embassies in Washington and Khartoum.

The US administration included Sudan on the list of state sponsors of terrorism in 1993, due to allegations that the government of former president Omar Al-Bashir was supporting militant groups. The allegations ensured that Sudan was ineligible for debt relief or badly needed financing from the International Monetary Fund (IMF) and the World Bank.