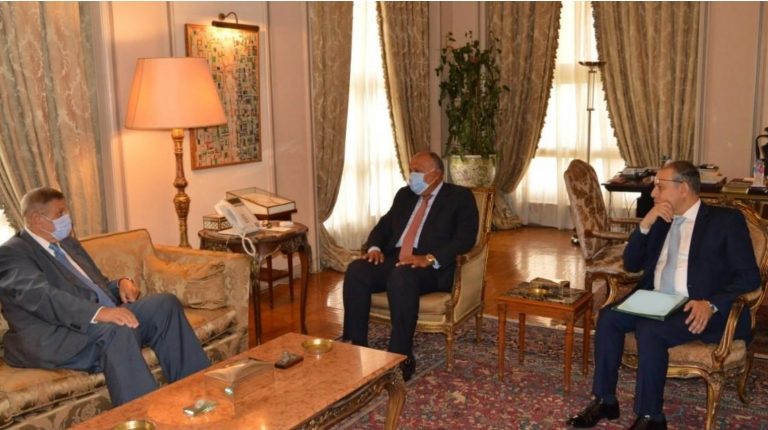 Egypt’s Minister of Foreign Affairs Sameh Shoukry has met with the UN Special Coordinator for Lebanon, Jan Kubis, to discuss the latest updates on the situation in Lebanon.

The meeting, which was held during Kubis’ visit to Cairo on Sunday and which saw the UN representative brief Shoukry on the latest updates in Lebanon, also reviewed the means of supporting the Lebanese people through the country’s current crisis.

A statement by Ministry of Foreign Affairs Spokesperson Ahmed Hafez noted that Shoukry stressed Egypt’s steadfast position in supporting Lebanon’s security and stability. Shoukry also highlighted the importance of continued support for Lebanon as it overcomes its current crisis.

The minister expressed confidence in the Lebanese people’s ability to overcome the challenges posed by the Beirut port explosion that occurred in early August. Shoukry visited Lebanon last month, following the explosion, to take part in discussions with Lebanese officials on supporting the country through the fallout of the explosion.

On 4 August, the Lebanese capital Beirut was rocked by an explosion that killed almost 200 and injured more than 6,000. The explosion sent a shock wave across the city, damaging buildings and blowing out windows up to 10 km away from the blast’s epicentre.

Lebanon’s then prime minister, Hassan Diab, said the explosion had been caused by about 2,700 tonnes of ammonium nitrate that had been improperly stored at the city’s cargo port.

Shoukry noted the importance of upholding the country’s national interests to meet the aspirations of its people. At the same time, there is an urgent need to distance the country from the dangers of regional conflicts and escalations.

He said that this could be achieved by accelerating the constitutional formation of a government. The move will help restore stability to the country and enhances the international community’s ability to support state institutions and provide the necessary aid.