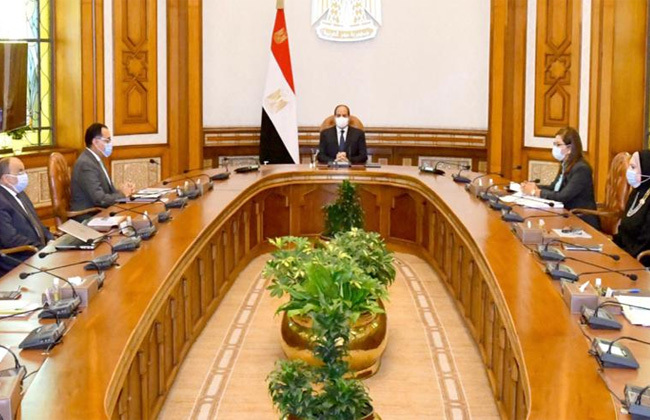 President Abdel Fattah Al-Sisi directed, on Monday, for the regular monitoring of the performance and results of Upper Egypt development efforts, to ensure continued development and the creation of new opportunities in agriculture, craft industries which Upper Egypt inhabitants are famous for.

Al-Sisi followed up on the latest developments of the governmental programme for local development in the Sohag and Qena governorates, the Presidency Spokesperson Bassam Rady said.

The President also called for quick completion of the programme’s infrastructure projects, whilst asserting the need to promote sustainable rural development and integrated urban development for the benefit of Upper Egypt’s governorates.

The meeting tackled the government’s efforts in the Upper Egypt local development programme. The programme is being carried out in cooperation with the World Bank and aims to advance development in the governorates of Sohag and Qena, especially by supporting the competitiveness of economic sectors and developing industrial zones.

The programme is also trying to create a business climate for investors, in addition to supporting the institutional development of work systems. Improvements to infrastructure and public services are being undertaken, in addition to enhancing the role of information and communication technology.

During the meeting, El-Said announced that the government has directed investments of about EGP 160m to developing Upper Egypt over the past five years, constituting about 20% of total government investments.

Minister of Local Development Mahmoud Shaarawy indicated that about 3,707 projects were funded in the first phase of the programme in Sohag and Qena governorates. These include projects to develop potable water stations, sanitation services, roads, transportation, and canal coverage, in addition to economic development projects and strengthening local units.

The programme has also allocated an additional budget to support anti-coronavirus precautionary measures in the two governorates, Shaarawy said. He added that the first phase of the project has provided about 250,000 job opportunities.

In a separate meeting, Al-Sisi followed up on the efforts to enhance local products and the national programmes to support exports, directing that all possible means of support should be provided to enhance the movement of Egyptian exports in African markets.

He instructed for contracting procedures be provided for acquiring industrial complex units nationwide, including cancelling and reducing fees to support young investors in the field of small- and medium-sized enterprises (SMEs), as well as providing more job opportunities.